Last month I had a most wonderful experience. Stephanie May of La Photographie put out a Muse Call with the theme of Vintage Glamour. I met Stephanie (aka One Chance Fancy) at Stripper’s Holiday and then won a virtual photoshoot with her at a fundraising auction. I had wanted to do an in-person shoot with her ever since. And I had wanted a boudoir shoot for my big birthday back in 2020 (we know how that turned out). So, I jumped at the chance. I picked two themes: Hollywood Glamour and Romantic Realism.

Before the shoot we had a video call where she explained what I could expect on the day and also explained the various photo packages (with a Muse Call I was only paying for photos, not the shoot itself) and then sent me all sort of information to prepare me for the shoot. We also had a follow up call after I’d had time to make some decisions about wardrobe and hair. I put this off for a while because I just couldn’t do anything for a time after Albert died and Stephanie was very understanding.

When the big day arrived, I packed everything that I had planned, plus a couple extras items, just in case. Ultimately, I’m very glad I did, but I’ll get to that later. With clean skin and a fresh manicure, I set off for Connecticut at not very early in the morning.

I arrived, only a little late, at Stephanie’s charming Victorian house/studio and met Jess, the hair & makeup artist who would make me look glamourous. And she did! I had no idea what she was doing until the dramatic reveal in the mirror. She made me look amazing! And even improved the style on my wig.

The first set was Hollywood Glamour, which we shot in the parlor with a plush sofa and (faux) zebra skin rug. One of those last minute grabs was the white fans that Donna Touch recently refurbished for me. After a few shots with a fan alone in the dining room, we set it on the couch behind me. I wore a silver satin Cathrine D’Lish robe (a birthday present to myself), which Stephanie had steamed until it flowed like a dream. We took a number of photos of the couch and a few in front of the gorgeously stenciled wall on the stairs. It was really rather decadent, lounging in a luxurious robe while being told how glamourous you are. I felt like quite the Hollywood starlet

Then it was time for the second set. Jess changed my lipstick, then added my other wig, which she had carefully brushed and styled. The transformation was amazing.

We headed upstairs to a bedroom that had been turned into a seraglio with draperies and swags of luxurious fabrics. I know blue is a very flattering color for me so I brought some lengths of satin, some sheer veils, and a sari Betty brought me back from India and Stephanie incorporated them into the set.

I had originally thought of doing implied nudity with a fabric drape, but one of the things I grabbed at the last minute was my blue and gold robe with the long train. I wore that. Sort of. The entire set was shot with natural light from a window to my left. Very Vermeer. I felt so very beautiful and the robe came off.

Photography complete, Stephanie went off to review the images and I settled in at the dining room table with a book and a decadent charcuterie plate. She came back with about 75 images which I had to winnow down. And all the Hollywood Glamour shots had the option of color or black and white. The package I had selected included 8 prints. Only 8! In the end I was only able to get it down to 14 and added the additional images to my tab.

Then I packed up and headed home. I think I was there about 5 and a half hours from start to finish — make up and hair (wigs), two shoots, and the image review.

A few days later, Stephanie sent me my retouched images and I had some major buyer’s remorse about all the gorgeous shots I tossed on the cutting room floor. I asked if I could upgrade to all the digital images. It just wasn’t that much more $$ and I have no regrets.

Besides the photos, I’ll also be getting a boudoir video, which was a special bonus.

To sum up, I loved the experience. I felt gorgeous and glamourous and thoroughly pampered. Jess of Selva Beauty did such a great job with my makeup and wigs. I wish I could recreate what she did with my eyes. Stephanie’s artistic vision and attention to detail created beautiful images. I think it’s a testament to her skill as a photographer that I ended up springing for all the images.

I’ve teased you enough. Here are my favorite images from each of the shoots (at least the SFW ones). 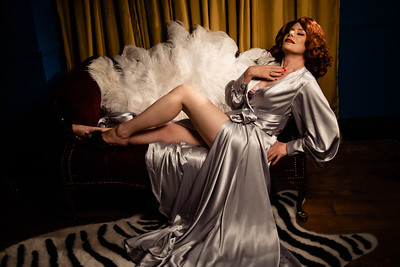 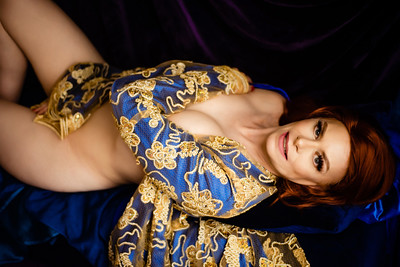 There were more (including some NSFW) that I showed my Patrons right away. And now that I have all the images, I’ll probably give them some more.

If you’re thinking about a boudoir shoot, I highly recommend La Photographie! And if you’re not near Connecticut, don’t worry! She travels a lot.

P.S. Don’t forget to nominate me for the Producers Dream and Dorian Gray Golden Pasties!