I promise I will get back to the burlesque soon, after all, I still need to tell you about my travels to Winnipeg. However, I didn’t want to leave you hanging after my missive of Friday.

Thursday night I was awakened by Scratch yelling that something was wrong with Albert. He was behaving very strangely and clearly having trouble breathing. We raced off to the animal hospital. It was a terrifying trip, dear reader. After some oxygen and some tests, the vet diagnosed a possible asthma attack, gave us some recommendations, and we took him home at about 2:30 in the morning.

At about 7 in the morning Scratch yelled again — Albert was having a seizure. Then he had the same strange behavior (although thankfully not the breathing issue) of the night before. And then he was perfectly normal. Back to the hospital we went.

We realized he had probably had a seizure the night before, but we had only seen the aftermath. He was admitted to the hospital for observation and to have a battery of tests. His People were pretty well wrecked at this point and went home to fret. We did visit him in the evening and he was happy to see his Man, if a little dopey from the anti-seizure medication.

All his tests came back clear and we brought him home Saturday afternoon with a diagnosis of epilepsy of unknown cause. He’s very unsteady on his feet and he’s having a hard time climbing up and down from the day bed (his favorite spot and usually an easy jump), even with the trundle bed out to make a step. He’s uninterested in much of anything except sleep and food, although he enjoys being petted. Even his favorite toy holds no interest. We’re told it will take him a couple of weeks to adjust to the medication. Also, his fur was shaved in a couple of places, including the top of his head, so he’s not his usual handsome self.

I have nothing but wonderful things to say about Angell Animal Medical Center. Everyone we dealt with was terrific. The fact that Albert was able to see a neurologist was incredible. If you need medical care for your pet, I can’t recommend them highly enough.

The outpouring of love and support from all over the internet has been amazing and we appreciate all your kind words. It really kept us going, knowing how many of you were sending us well wishes and healing thoughts.

And here he is, not the best picture, but he’s not at his best right now. 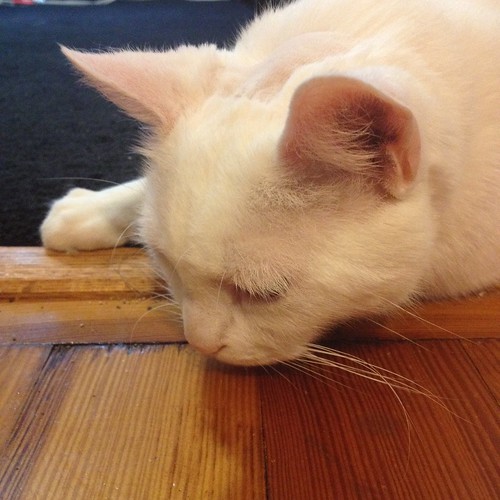