A Night of Classic Burlesque

I’d been looking for an excuse to make a trip to the Southwest and when I saw my friend Holly Rebelle looking for out of town performers for her show in Albuquerque, I jumped at the chance. I met Holly at The Great Burlesque Expo something like 9 years ago, at which she and her troupe took home a Howard Award. I know she wasn’t expecting anyone from as far out of town as I am, but it turned out I wasn’t the only one who came from the East Coast!

Dr. Wilson of the Theatre of Miracles in Maine had relocated to Albuquerque and he and his lovely wife graciously offered me a place to stay. They’ve got a gorgeous guest suite and parrots! I couldn’t linger too long, because I was off early to tech for the show.

I had been nervous because Holly specifically requested “An Invitation”, which requires some set pieces that I couldn’t bring with me (I can barely transport Super Screen in my car, let alone by plane). She and David came through for me with the required screen and a backlight.

Launchpad, the venue, is the sort of place I’ve performed at before. It’s made for bands, with a high, carpeted stage, a tiny dressing room and a bar up front. The crew did a great job, bringing in pipe and drape to make the stage more burlesque friendly, and the performers took over the back half of the balcony, so as not to crowd the dressing room for when someone actually needed to dress. Also, a nice (and necessary touch) was a big cooler full of ice and bottled water for the performers. Albuquerque is incredibly dry and also at about 5000 feet above sea level. Both of which were a new experience for this New England gal and I was very careful not to get slammed by either, especially since I was also terribly short on sleep.

I did have time between tech and doors open to go down the block and relax over a light supper at Duel Brewing, which was lovely — four kinds of cheese and an array of sweet and sour accompaniments.

I was on near the end of the line-up, so I got to see much of the show, albeit from way in the back. Feisty Baudelaire let me have a corner of her merch table to vend my little book. It was a *long* show. Apparently the venue requires a three and a half hour show, but Holly and crew made sure it was entertaining. 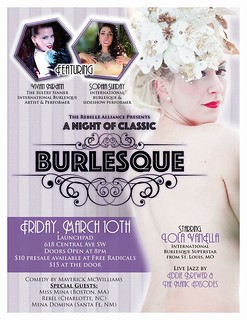 The show started with a stand-up comedy set (which I missed completely) and then we got into the burlesque. Hostess Lola Van Ella graced us all the way from St. Louis. She began by singing “Let Me Entertain You”, a promise of what was to come. I don’t think I can give you a blow by blow of the entire show, since I didn’t see all of it and it kind of ran together into a lovely, glittery blur, due to exhaustion and excitement. I’ll do the best I can.

There was a lengthy intermission, but it was filled with live music from Eddie Brewer & The Manic Episodes.

At this point I went to the dressing room to get ready, so my descriptions are about to get even hazier. 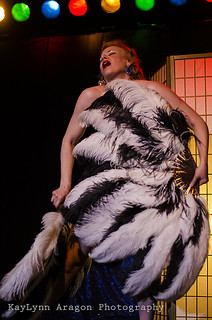 The show was so good, so strong, so many excellent performances. I’m so pleased to have been a part of it!

Here’s everyone! All photos by KayLynn Aragon Photography 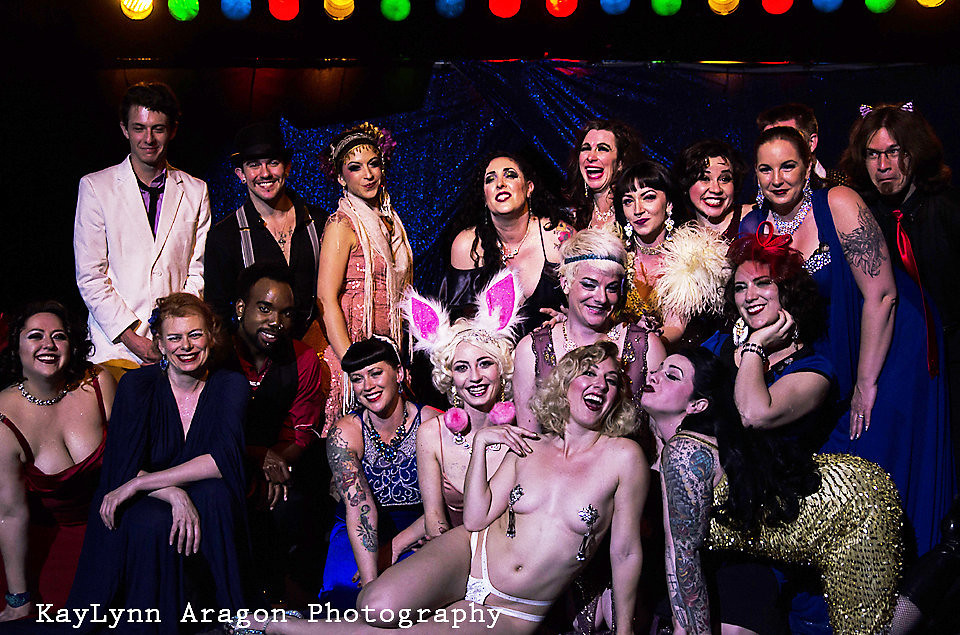 After the curtain call, my hosts took my weary ass home. At that point, not counting the fitful naps I got on the planes, I’d been up for 22 hours.

Thank you to everyone who came out and supported the show and especially those of you who stayed for the whole thing! Big thanks to Holly for inviting me out and being so wonderful. And deep gratitude to Mr. Rebelle, the Kitten Squad, and all the tech crew — you made my act look great. Finally, to my fellow performers — it was great meeting all of you and seeing you strut your stuff. Thanks for being so welcoming to a traveling showgirl!