A Visit to Santa Fe

After my performance in Albuquerque Friday night, I was off to Santa Fe the next day. Well, originally I was going to spend all Saturday in Albuquerque and take the train to Santa Fe on Sunday morning, but there was a burlesque show Saturday night and it seemed dumb to miss the opportunity. And then Dr. Jen offered to come get me and put me up, so it was a no-brainer.

The landscape is just breathtaking. That’s the word I just kept using because my vocabulary was inadequate. Mountains, mesas, exactly the colors you think of as “southwestern”. This photo does not do it justice.

We stopped at The Teahouse where I had a lovely cranberry almond scone. You know I take my scones very serious and this was pretty fabulous. Serving it with lemon curd was a nice touch.

The burlesque show, put on by Zircus Erotique was at The Palace, which I was told was once a brothel. It certainly has the right decor — red flocked wallpaper, decorative ceilings, and fancy chandeliers. The performance was at one end of the dining room — no stage, which is always a challenge. We were sitting in the bar, watching the show through open windows in the partition between rooms. Not terribly ideal sight lines, especially since the place was packed.

After doors opened, go-go dancers began circulating through the venue. Until the show started and then again at intermission, they slithered and shimmied through both rooms, getting up close with the patrons, but never being intrusive. This was a new approach to me, which worked well because of the lack of a stage and the aforementioned sight line issues.

The show itself was many of the same performers I had worked with the night before, but not necessarily the same acts. I really can’t give you a blow-by-blow this time because I don’t have a set list to jog my memory.

I was impressed with the Mosaic Dance Company, a trio of belly dancers with some really tight choreography.

I was eagerly awaiting Sophia Sunday’s second number because I assumed it would be the razor blades I had missed Friday night. However, it was something entirely different, but still weird and wonderful. She started on a chaise, fairly classic, but after stripping a bit, she set a bed of nails on it. She proceeded to demonstrate that she’s not called “The Pain Proof Pinup” for nothing. I loved the stocking removes. The act was kind like this.

Al Monds danced with a flowing white cape she used to great effect. Lola was trying to remember the dance pioneer she resembled. “Loie Fuller”, I called out.

Lola Van Ella once again impressed me with her stage presence and stripping, this time to one of Scratch’s favorite Doors songs. She works the audience so well. I learned a lot from watching her.

The stand out of the evening for me was Holly Rebelle. So far this weekend I had seen her be classic and be vaudevillian, but for her last act, she was just fierce AF with a passionate performance to “Sabotage”. She told me before the show she was nervous about it, but she dominated that room.

After the show Dr. Jen’s assistance, Gia, wanted to meet some of the performers and do some networking. I did feel sort of weird making the introductions when I’d only met some of these people the night before.

The next day Dr. Jen, Gia, and I went to Ten Thousand Waves. It’s a beautiful, tranquil Japanese bath house and spa. It’s one of those places that looks like it could have opened yesterday, because everything is so beautifully maintained, or always been there, since the architecture is so harmonious and fits perfectly in its setting. We got a private tub and it was just the thing for a weary traveler to stretch and soak. I will definitely be back. 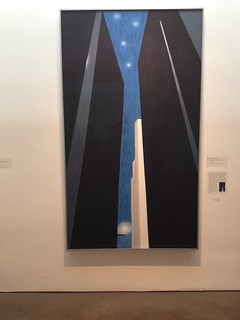 I insisted we go to the Georgia O’Keeffe Museum, since how could I be in New Mexico and not see some of her art. The first thing that surprised me was that you could take pictures of most of the art; only a few items were labeled as off limits. The other surprise was the painting to the right. I immediately recognized New York, just from those few shapes. Like most, I associate O’Keeffe with southwestern landscapes and yonic flowers. This painting changed my perspective on her style. It’s a toss up between this and a more expected calla lily as my favorite work.

On the way to Jen’s log cabin/lab in the mountains, we stopped at the town of Español for dinner at El Paragua for some local cuisine. I couldn’t decide, so I got an (enormous) combination plate (that I barely made a dent in). I got to try carne adovada (pork in a red chile sauce) and posole (hominy and pork stew) and sopapillas (heaven in a basket — pillowy fried dough with honey). I’m a big wimp when it comes to spice, so I was pleasantly surprised that the adovada wasn’t too hot for my palate. The red sauce on the enchilada was another story. Because I had to try green chile eventually, I tried a bite of Jen’s chile relleno and determined that while the heat wouldn’t kill me, I still don’t like green peppers in any form.

And then we continued the long, very scenic drive up into the mountains. I’m positive I’ve never been at an elevation that high before.

As this has gotten quite long, Dear Reader, and I have now left the city in the title, I shall sign off for now and perhaps take up my narrative again tomorrow.