I’d like to return to the theme of big props. I haven’t covered all the big props in the BeauTease collection, before I even get to the props we built for The Big Time. This is one of my favorites, because it looks great and the construction is so clever: Evie’s Oyster

Evie was our Oyster Girl for Madame Burlesque, so obviously she needed an oyster. We were touring with this show, so the oyster need to break down for transport, but it had to be large enough that Evie could fit inside with a minimum of contortion (she’s pretty bendy, but still…) Also, it needed to be light enough that the two sea nymphs who danced with Evie could carry it onto stage with her inside.

And this is how it appeared: 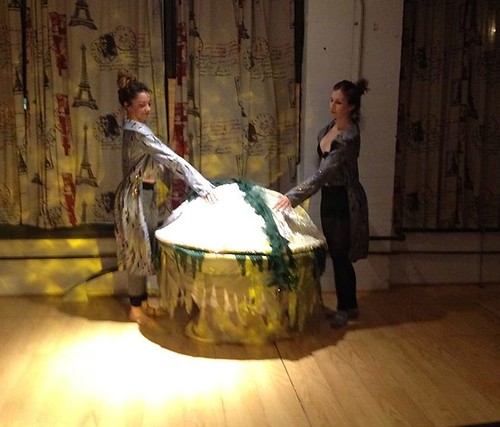 It’s very cleverly made from two papasan chairs. Betty sacrificed one for the cause and I think the other was a Craig’s List find. The two seats and one base were covered in fabric and decorated with “seaweed” and pearls, then securely fastened together with zip ties. We tried some other methods of attachment, but those proved the best, even though we had to cut them off after every show.

And when the oyster opened: 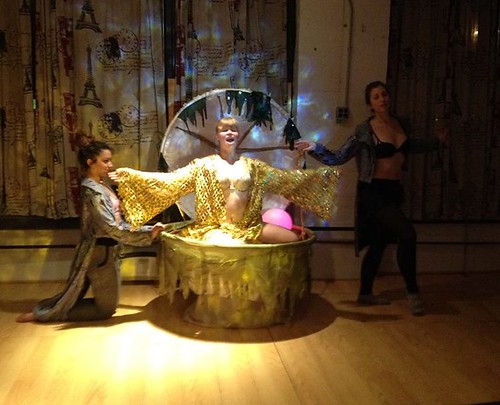 Behind Evie’s arms, you can just see the two golden cords inside that keep the lid from falling back when the oyster is open. What you can’t see is the wooden platform Scratch built for Evie to sit on, so she could just step out instead of clambering up.

Her pearl was made from a battery-powered accent lamp, so it gently glowed.

The only real problems I remember having with the oyster was a venue with a stage entrance that was so narrow the oyster had to be carried through sideways and Evie had to hop inside once it was positioned on stage and another one where the tiny backstage area had no room for it at all. For the most part it’s a good example of “packs (relatively) small, plays big”.