Cats are a Gift from the Universe

(no Friday Tip this week. I think this will explain why)

I’ve always believed cats are a gift from the Universe. When you need a cat, one comes into your life. However, the Universe can also take cats away… 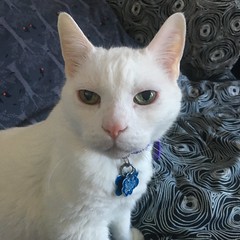 Nine years ago, Albert A. Cat wandered into our life. If you’ve been reading my missives that long you know how Scratch, not a cat person, found him on the street and they immediately knew they needed each other. He is a delight and the center of our little world.

Three years ago Albert started having seizures, which terrified us. Fortunately, with medication, he is perfectly fine. However, we keep a close eye on his health and he sees a couple of specialist vets. 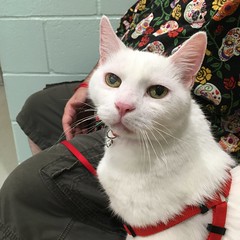 Recently we discovered his thyroid levels were slightly elevated and we had a couple of options to treat it. There was really no question that we were going to go for radiation therapy.  It would cure him, instead of just treating the issue with diet or medication for the rest of his life. There were just two drawbacks — it’s very expensive and he would be in the hospital for two weeks without any visits allowed. In all his time with us, he’s never been away from both of us for more than four days.

But we did it. The staff at Angell Animal Medical Center are great. We got daily reports on his progress and photos. Scratch started a GoFundMe and so many people, including a bunch we didn’t even know, contributed to Albert’s medical bills. We were counting down the days until he could come home. (Albert is fine. I’m explaining to you because you look nervous.) 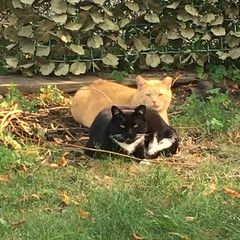 But Albert is not the only cat in our lives. There are several feral cats in our neighborhood and two decided to make our yard home. They were inseparable and would constantly be headbutting one another in a most adorable fashion. We named the black and white one Tux and the big orange one Ginger Tom. Collectively we call them The Boys. Tux was wary, but Tom was sweet and trusting. Scratch built them a deluxe shelter (with heat in the winter) and fed them every day. He would call and they’d come running. It was one of my great joys to peek out the window and see what The Boys were doing — napping in the sun, grooming each other, hiding amid the plants in my garden. To be honest, Tom’s my favorite of the two.

Last Thursday I fed them in the evening as usual. Friday morning only Tux came. He just sat and looked and waited. Tom is the more adventurous of the two and would often be off doing “Tom things”, but I was worried. Tux didn’t usually act like that.

But it was Expo weekend and off we went to Salem.

We got back on Monday, excited to pick up Albert the next day. But still no Tom.

After asking our other cat-feeding neighbors, we found out that Tom was killed sometime in the middle of Thursday night, probably by a coyote. I like to think he was defending Tux. 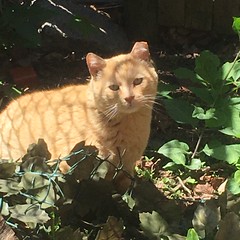 Albert’s homecoming was filled with tears. And because of the radiation, we have to limit our contact with him for the next few days. Of course all we want to do is hold him close and never let go.

We share a back fence with The Rectory for our local Episcopalian church and The Boys frequented their yard as well. It was the Rector and his wife who found Tom.

Yesterday, in the rain, we had a funeral. The Rector’s wife and the Sister who also lives there and Scratch dug a grave in their garden and we laid a cairn of stones over him. It’s a beautiful, peaceful spot and there’s a bush of rosemary right next to him. Sister gave me a bunch and it’s in a vase next to me as I write. Rosemary is for remembrance.

It’s hard to feel so helpless. I know there was nothing I could have done to save Tom’s life, but it hurts so much. I know feral cats have hard and short lives, but it’s not fair. We will continue to care for Tux and hopefully he’ll know our yard is a safe place. He sits and waits for Tom and it just breaks my heart. I hurt so much.

Scratch said it better than I can: “Tom was sweet, fearless, and dumb. And he trusted me and loved Tux with a fierceness that was a joy to see.” I will miss him more that I can say.

All I can do is love Albert and try to comfort Scratch, as he tries to comfort me.