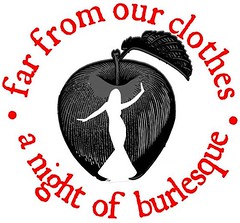 In continuing with our penchant for performing at creators of alcohol in Salem, we had our first show at Far From the Tree Cider. As with our shows at Deacon Giles, Brigitte Bisoux made the connection for us. In this case, because she’s a brand ambassador for the cider, so it seemed like an especially great fit.

We did two shows, as is our wont for small venues. The first audience was good, but the second one was fantastic! They were super enthusiastic and a joy to perform for. It was also the birthday of one of our long-time supporters, so we got the audience to join us in a non-direly rendition of “Happy Birthday”. Far From the Tree is very welcoming to dogs and babies. I don’t remember if there were any for the former there for the show, but there was a two-month old who (we’re told) enjoyed the show.

Because of our location, we threw in a couple of apple-themed acts. Brigitte did her infamous “Still Life” performance with a bowl full of apples instead of mixed fruit. Scratch mystified (and perhaps horrified) the audience with “Urban Legend”, involving an apple stuck wth double-edged razor blades. Artemisia sang the PMJ arrangement of “Criminal” because it’s by Fiona Apple (we amuse ourselves). And Betty closed out the show with “Don’t Sit Under the Apple Tree”, backed up by apprentices Ayo and Stephanie in their first show!

It was a bit logistically challenging to make a dressing room for ourselves. We were given the accessible restroom and the space in front of it. The challenge was that there were two doorways open to the tap room. We brought drape, but all the pipe is currently in The Expo trailer. Some very creative engineering was done with conduit, painter’s tape and even some ribbon to curtain off our space. It was cozy quarters, but we made it work. I made a backstage video for my Patrons.

We tried an experiment with this show. In New Orleans at the Legs and Eggs brunch, there were tip envelopes on every table printed with “tips” for enjoying the show. That seemed like a good, low-pressure way for the audience to tip if so chose. We included a piece of paper in the envelope so people could leave a note if they liked, and some of the results are in the photo.

The staff at Far From the Tree was terrific and we’re grateful to them for having us. We hope to do it again! We’ll be back in Salem next month at Deacon Giles with The Boston BeauTease Go Bananaz! (I still can’t believe I’m writing that). But our next show is this Saturday at The Castle on Charles in Rochester, NH.