A lot of people just use the name of the song they are performing to as the name of the act. There’s nothing wrong with that. But by giving your act another name, you make it uniquely yours. Don’t be just another “I Want To Be Evil”. If you use more than one song in your routine, it’s just easier to refer to the act by a single name, particularly when dealing with a producer or client.

Sometimes acts develop working titles that are descriptive, but strive for something you’d like an MC to announce. I think it sounds more polished and professional to say “Brigitte Bisoux in ‘Still Life'” rather than “Here’s Brigitte’s Fruit Bowl Act!”. Also, your act name can set audience expectations by creating a mood.

The name doesn’t have to be particularly creative, just look at Dita — she has an act called “Le Bain” aka “The Bath”, which tells you exactly what you’re getting. But you can also have fun with it and maybe make a play on the title of the song, like “Betty, It’s Cold Outside“.

I have an act that we just called “Three for the Show” for months, after the song I used. Plenty of people use that music, so I wanted a new name — something that highlighted the classic style, the pale colors, or the prominent use of a fur stole. I finally hit upon “Mina in Furs”. A little literary joke (perfect with my literary name) and a bit of sensuality.

And here I am discarding said fur at the Winnipeg International Burlesque Festival. 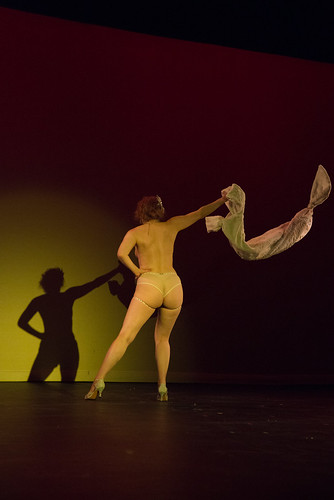 Like this tip? There are lots more in Miss Mina Murray’s Little Book of Better Burlesque.