Last night I got the sad news that Tempest Storm had died at 93*. In some way I thought she’d outlive us all.

She was probably the most famous of our Living Legends and I don’t need to rehash her life and career here (you can read her memoir or see Teaserama or the 2016 documentary Tempest Storm).

I first saw Tempest at Miss Exotic World in 2006. She strutted on stage in a purple evening gown and boa to the beat of an actual drummer. She was every inch a queen and owned that room. She had the audience in the palm of her hand her entire act (I think it was about 3 songs; definitely more time than anyone else got). This was a true connection between or past and our present, right there on stage in front of me. Even in her late 70s, she was gorgeous and graceful.

A couple of years later I was overwhelmed to learn we** would be performing in Tempest Storm’s Las Vegas Burlesque Revue for its New England dates. Tempest wasn’t performing, since she had recently broken her hip, but she introduced the show with her charming accent and gave the audience a good look at her famous figure and trademark flaming hair. She was so kind and gracious, posing for pictures and signing autographs afterwards. After the show at the Merrill Auditorium in Portland, Maine (easily the biggest venue I’ve ever played), the cast went out for a late-night seafood feast. At a long table packed with performers, there were oysters and wine and lots of loud conversation and laughter. I think we were celebrating Angie Pontani’s birthday. Tempest sat quietly at the end of the table, with a soft smile. I wish I had known what to say to draw her out, convince her to tell some stories of her amazing life, but I was too awestruck.

I’m grateful for those small brushes with greatness. Tempest was not just a Legend; she was Legendary. Our world is a little duller without her sparkle. 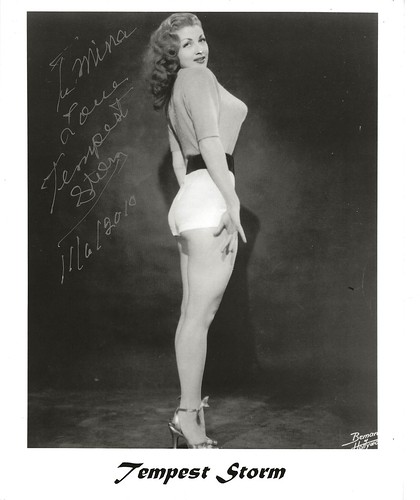 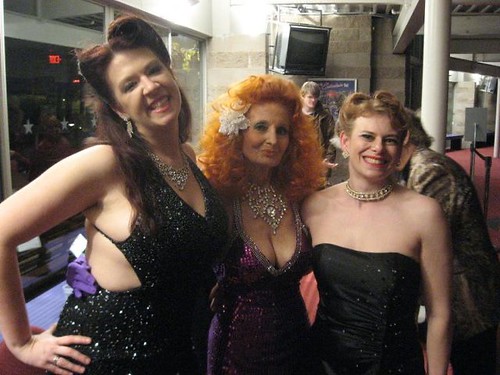 *or 23 — she was born on February 29.
**Betty and I were performing; Scratch ended up, as usual, supplying vital tech expertise and backstage support, including providing a chaise for Kitten DeVille to hump.