In the Kitchen: Asparagus Forced in French Rolls (1790)

It’s been a while since I did any really historic cooking. This late 18th century recipe for asparagus bits in a savory custard sauce served inside a hollowed-out loaf of bread makes a delightful light supper or, as recommended, a side dish.

From The Housekeeper’s Instructor by William Augustus Henderson (1790)
Asparagus forced in French Rolls.
Cut a piece out of the crust of the tops of three French rolls, and take out the crumb; but be careful that the crusts fit again in the places from whence they were taken. Fry the rolls brown in fresh butter: then take a pint of cream, the yolks of eggs beat fine, and a little salt and nutmeg. Stir them well together over a slow fire till it begins to be thick. Have ready an hundred of small grass boiled, and save tops enough to stick the rolls with. Cut the rest of the tops small, put them into the cream, and fill the loaves with them. Before you fry the rolls, make holes thick in the top crusts to stick the grass in. Then lay on the pieces of crust, and stick the grass in, which will make it look as if it were growing. This makes a very handsome side-dish at a second course.

The original recipe makes three loaves, but I cut it down to one, as is my wont.

Asparagus was well known in the classical world, where it was called “asparagus” by the Romans. The Emperor Augustus is reported to have said “celerius quam asparagi cocuntur” (“quicker than cooking asparagus”) to describe something done very fast. The vegetable didn’t become popular in northern Europe until the 16th century. The English, because they’re like that, mutated the perfectly good Latin name into “sparrow grass” or just plain “grass”, as did our author above. 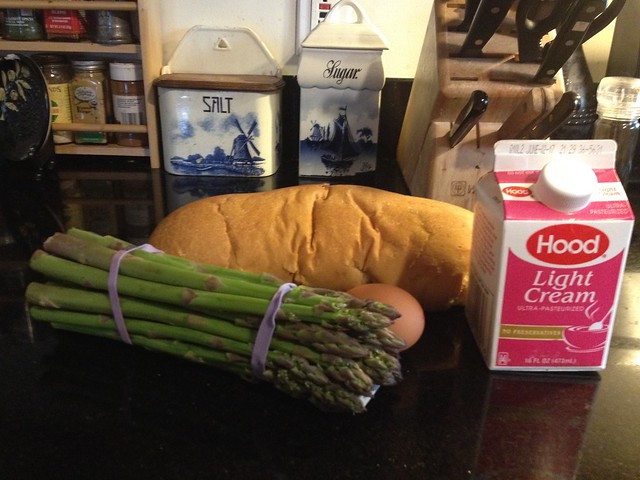 I start with a small loaf of French bread (you don’t want to use a baguette for this — it’s too long and skinny) and cut a big rectangle out of the top crust. Be careful not to break it when removing (done that). Carefully scoop out all the bread inside without cutting through the crust. I just pull it out with my fingers and maybe use a spoon for the last bits. I save the innards for something that needs bread crumbs. Poke a bunch of holes in the top crust. They should be just big enough to hold an asparagus stalk.

Then melt some butter in a skillet and fry the bread until it is toasted. There’s no butter in the above photo because I forgot it in the fridge. The lid is easy to fry, but the loaf is a bit awkward. I like to brush the interior of the loaf with some of the melted butter.

Cook asparagus until it’s just tender. This doesn’t take long (see the Latin quote above) If you don’t have your favorite method, you can see how I cook them here. Cut the cooked asparagus into small pieces. I think I usually cut them about an inch long. Reserve as many asparagus tips as holes poked in the bread lid.

Warm some cream in a small saucepan. I was using light cream, but you can use heavy cream for a creamier custard. I don’t like whipping cream because it has thickeners added to it. Beat an egg yolk in a small bowl. When the cream gets hot, temper the egg yolk by added a little cream to the egg, beating the whole while. Add the egg/cream mixture back into the cream. Season with salt and grated nutmeg (also missing in the picture — where was my head?).

Cook custard over low heat until it thickens a bit. Add the asparagus bits to the saucepan and remove from heat. You don’t want the asparagus to cook more, just warm up a touch.

Spoon the asparagus-custard mixture into the loaf. Take the reserved tips and stick them into the holes you poked in the lid. Put the lid on the loaf. Voila! It looks like a little grassy hill. Adorable!

I end up cutting this into very messy, but delicious, slices, because the custard oozes out as soon as the structural integrity of the loaf is breached. I suppose one could treat it like a bread bowl, where the loaf is primarily a serving vessel, but I like the combination of bread, custard, and asparagus in each bite. 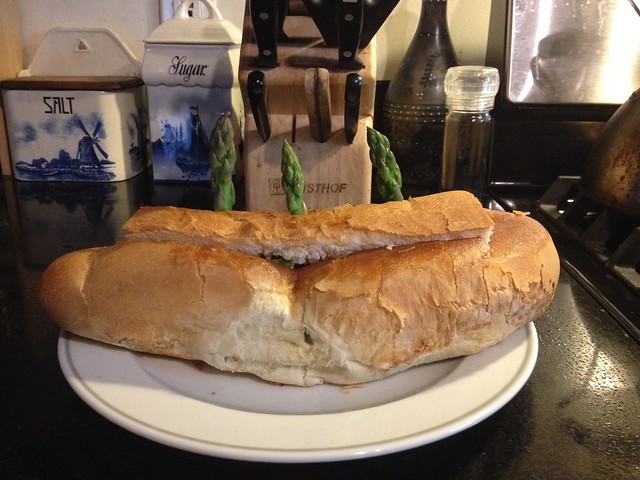 Asparagus Forced in a French Roll
1 small loaf of French bread (should be crusty, but not a baguette)
Butter
5 oz. cream
1 egg yolk, beaten
1 bunch asparagus (about 30 skinny stalks)
Salt to taste
Nutmeg to taste

Cut out a lid from the top crust of the loaf. Carefully scoop out all the bread inside without damaging the crust. Cut several holes in the lid.

Melt a little butter in a skillet, about a tablespoon or so, and fry the bread until it is toasted.

Cook asparagus until tender. Cut the cooked asparagus into small pieces. Reserve as many asparagus tips as holes poked in the bread lid.

Warm cream in a small saucepan. Temper egg yolk and add to cream. Season with salt and freshly grated nutmeg. Cook over low heat until sauce thickens. Add the asparagus bits to the mixture and remove from heat.

Spoon the asparagus-custard mixture into the loaf. Take the reserved tips and stick them into the holes cut in the lid. Replace the lid on the loaf. Serve.