In the Kitchen: Best Ordinary Pottage (1615)

Sinister Sarah, a member of my Advisory Committee on Patreon, requested an Elizabethan recipe. (If you’d like to make requests as well, please join the $5 tier). Technically this recipe was published after Elizabeth’s death, but it’s still got a  Renaissance style, rather than a Restoration one.

therefore to make the best ordinarie Pottage, you shall take a racke of Mutton cut into pieces, or a leg of Mutton cut into pieces; for this meate, and these ioynts are the best, although any other ioynt or any fresh Beefe will likewise make good Pottage: and hauing washt your meate well, put it into a cleane pot with faire water, and set it on the fire; then take Violet leaues, Endive, Succory, Strawberry leaues, Spinage, Langdebeefe, Marigold flowers, Scallions, & a little Parsly, & chop them very small together; then take halfe so much Oat-meale well beaten as there is Hearbs, and mixe it with the Hearbs, and chop all very well together: then when the pot is ready to boyle, skum it very wel, and then put in your hearbs, and so let it boyle with a quick fire, stirring the meat oft in the pot, till the meat bee boyld enough, and that the hearbs and water are mixt together without any separation, which will bee after the consumption of more than a third part: then season them with Salt, and serue them vp with the meate, either with Sippets or without. (Gervase Markham, The English Huswife, 1615)

If you want to see how I cooked this (in 16th century attire!), you can join my Patreon at any level to watch the video. 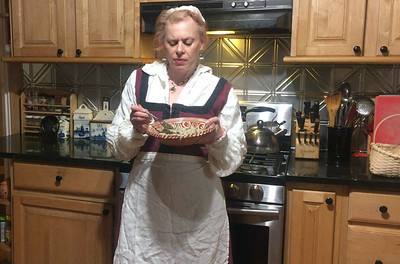 I used lamb, since mutton is hard to acquire. For the herbs I used endive, spinach, violet and strawberry leaves (from my garden), parsley (also from the garden), & scallions. “Succory” is chicory, but my supermarket didn’t have any. I wanted curly endive, to be closer to the historic sort, but all the market had was Belgian. Although I’ve grown edible marigolds in the past, I didn’t this year. Even herbals of the time period were unclear about exactly what herb “langdebeefe” (ox-tongue) is, so I felt no guilt at leaving it out. Oat meal as used here is meal made from oats, not today’s rolled oats oatmeal. I started with steel-cut oats (since that’s what I could acquire) and ground them fine with a mortar and pestle.

I put the lamb, cut into chunks, and bones into a heavy pot and covered it with water and set it to boil. I chopped the greens fine. There were 4 cups of greens, so I added 2 cups oat meal, according to the recipe. Once the broth had almost come to a boil, I skimmed off any foam, and then added the greens and oats.

Markham says to boil it on a quick fire, stirring, until it’s one-third reduced. I had to keep stirring it as the pottage got very thick very quickly. After half an hour, I called it done and added some salt.

I was expecting a thick soup or stew and what I got was more of a porridge — very solid. Still, it tasted good. It was rather meaty-flavored but also fresh and bright from the greens. I had been concerned about the bitterness of the greens, but cooking mellowed them out. Markham says you can serve the pottage on sippets, pieces of stale bread to soak up broth or gravy. My version had absolutely no liquid to soak up, so I skipped the sippets. I wasn’t thrilled about how dense the pottage turned out, although I really liked the flavor. 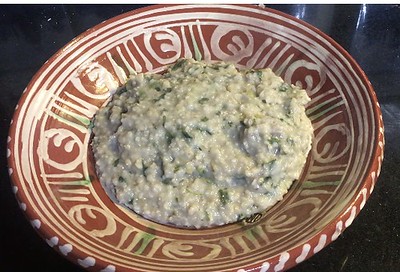 The next morning I reheated some for breakfast and decided to add quite a lot of boiling water to thin it out. And that got me thinking about jook, a thick rice soup (thanks to Louise Hung for her recipe!). It’s also made with meat and veggies and grain, but a smaller amount of rice and a lot of liquid. The result is definitely soup and not cereal. I think the proportions of oats to water in the pottage needs to change. The pottage also wants to cook for a longer time on lower heat, mostly covered.

Here’s what I’d do next time.

Cover lamb with water and bring to a gentle boil. If any foam rises to the surface, skim it off. Add greens and oatmeal. Loosely cover pot and simmer over low heat, stirring occasionally. Cook about 1 hour. If mixture gets too thick, add up to 2 cups additional water. Salt to taste.