In the Kitchen: Christmas Pudding, Part 2

Last week I showed you how to make a fruity, boozy Christmas pudding. Today we’re going to talk about how to steam it and store it.

To steam the pudding, you’ll need a pudding basin, a pudding cloth, and a pudding string. Fortunately, none of these are too difficult to acquire. You’ll also need a big pot, large enough to hold the basin. 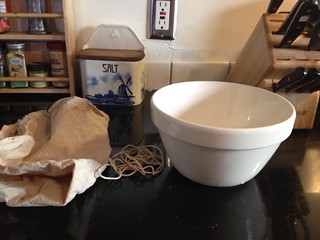 A pudding basin looks like a bowl. In fact, you can use a mixing bowl. The important parts are that it’s heat-proof (mine are ceramic) and it has a lip where you can tie the pudding string and it won’t slip. For this recipe you want a 6-cup basin. There are also metal pudding molds, which can make for a more decoratively-shaped pudding.

The pudding cloth is a big piece of plain, undyed cotton fabric, well-washed. Mine is a square of unbleached muslin. Flour sack towels also work well.

Greasethe inside of your basin well, then spoon the pudding batter into it. The pudding should be below the rim of the basin.

Wet your cloth with hot water and wring it out. Some say to also flour the wet cloth to keep the pudding from sticking to it, but I’ve found it just makes a mess.

Place the cloth on top of the basin and tie the string just under the lip to hold the cloth in place. I used a slipped reef knot to make a secure knot that can be untied easily when it’s wet (which it will be). 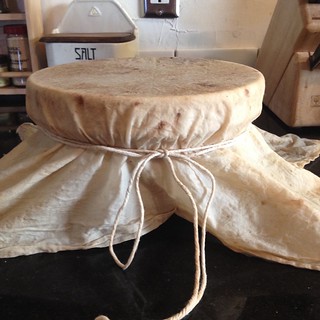 Now take opposite corners of your cloth and tie them together over the top of the basin. Repeat with the other two corners. You now have a handle. 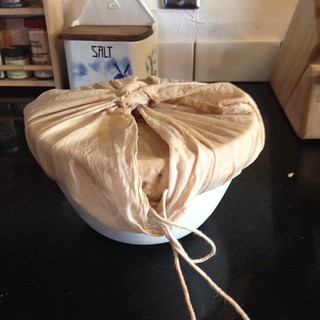 Now it’s time to steam! You’re going to place the pudding in a pot of boiling water, with the water coming at least half way up the basin, but no more than an inch or two from the top. It’s tricky maneuvering a heavy pudding into boiling water, so I’ve found the best solution is to use a pot with a pasta insert. 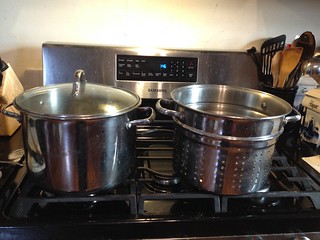 I fill the pot with the insert in place, check the water level by putting in the basin, then take the insert and basin out, and start boiling the water. Once it’s boiling I gently lower the insert with basin into the pot. If you don’t have this kind of pot, use the cloth handles to carefully and gently lower the pudding into the boiling water.

Cover, lower the heat, and let the water gently boil for at least 2 hours (more won’t hurt — I’ve seen recipes call for five hours of steaming). You’ll need to replenish the water from time to time as it boils away, so keep a teakettle handy. Make sure the water you add is boiling and that you don’t pour it onto the pudding itself.

After a couple of hours, take the pudding out. Either just remove the insert or use the cloth handles. Be very careful! Everything is going to be steaming hot and wet. 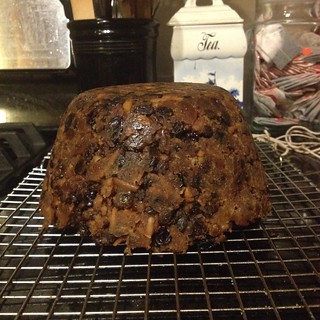 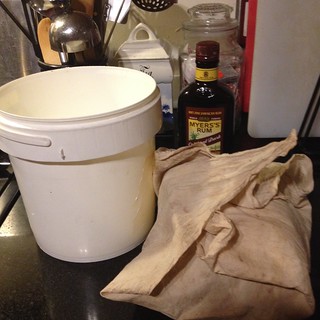 Now we age it. You’ll need your pudding cloth again, and your alcohol of choice, and a container in which to age the pudding. I use a food-grade plastic bucket with a lid that I got it from my local ice cream shop — I think it used to hold marshmallow topping.

Wrap the pudding in the cloth and put it in the container. Pour 1/4 cup booze over the pudding. Cover your container. It doesn’t have to be an air-tight seal — in fact, it shouldn’t be. Put it someplace cool and dry until Christmas. I keep mine in a cabinet in my unheated pantry. If you don’t have a pantry or a cellar or similar, you could keep it in the fridge.

Once a week, flip the pudding and feed it another bit of booze. I know some people who use a pastry brush to gently coat it with alcohol. I’m lazy and just pour a splash of rum on top and let in run down the sides. You don’t even need to take the cloth off.

Puddings should age for a minimum of a month. I’ve aged them for as long as a year and a half. As long as you keep them somewhere cool and keep feeding them alcohol, they’re going to be fine.

Once we get closer to December, I’ll tell you how to prepare your delicious pudding for serving, how to make sauce, and most importantly, how to flame it!