In the Kitchen: Christmas Pudding, part 3

Earlier in the year I showed you how to make and steam a Christmas pudding. Now that your pudding is good and aged, it’s almost time to serve it!

Take your finely-aged pudding out of its aging container and unwrap it from the cloth. Get your pudding basin and butter it well, then slip your naked pudding into it. Wet the pudding cloth, wring it out, and tie over the top of the basin with your pudding string just like you did before. Steam the pudding for an hour or two until it’s heated through. You really can’t overcook it; just make sure the water never boils away.

Traditionally Christmas pudding is served with hard sauce. It’s not called “hard” because it has booze in it (although it does), but because it can’t be poured. You’ll have to scoop it onto your warm slice of pudding where it will melt into a puddle of deliciousness.

To make hard sauce, you need: 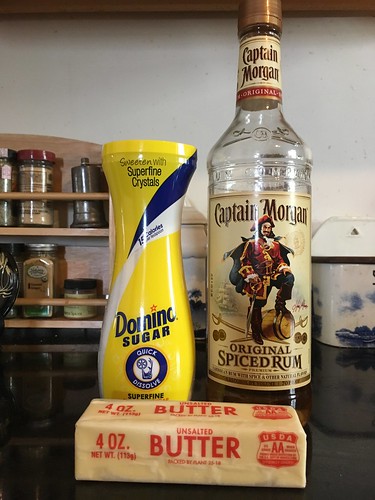 Superfine sugar, also called bar sugar and caster sugar (in the UK), can be a little hard to find. If you can’t scare up any, use confectioner’s sugar (I don’t care for it because it’s got cornstarch added) or grind up granulated sugar in the food processor. Straight granulated sugar will make your hard sauce gritty.

For the booze, use whatever you’ve been aging your pudding with. In my case, that’s rum. Usually dark rum, but my pudding drank it all.

Cream together the butter and sugar, then beat in the booze. It’s that easy! Keep the hard sauce in the fridge until you’re ready to serve.

Now to serve the pudding aflame!

Place the pudding on a serving platter, preferable one with a bit of a lip. Gently warm 1/2 cup of booze in a sauce pan. Turn out the lights in the dining room and place the pudding platter on the table. Get your camera ready. Pour the warm booze over the pudding and light the vapors with a long match. Voila!

When the flames go out, slice and serve with a generous spoonful of hard sauce. 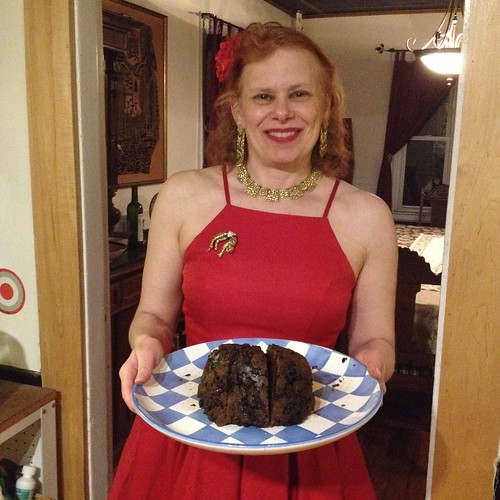 If you make Christmas pudding, I want to hear about it!