It’s been rather hot so far this summer. A perfect time for icy-cold treats! The other day day I made some delicious mocha marlow. “Marlow?” you ask, “What’s marlow?” Like its equally obscure cousin mallobet, it’s a frozen dessert made with a marshmallow base. I’ve definitely dated this style of dessert back to the 1920s (Clara Bow contributed a recipe for Vanilla Marlow to a 1929 movie star cookbook), but it may go further back to the earlier days of ice boxes. These desserts were still being made into the midcentury, but seem to have then died out completely.

Both marlows and mallobets are made with melted marshmallows. Marlows get their fluffiness from whipped cream, while mallobets (marshmallow-sherbet) contain stiffly beaten egg whites. You don’t need an ice cream maker for these concoctions, which was part of the appeal, I think.

I made this marlow on a terribly hot day and I must confess that cooking everything over boiling water was torture, but the end result was worth it. 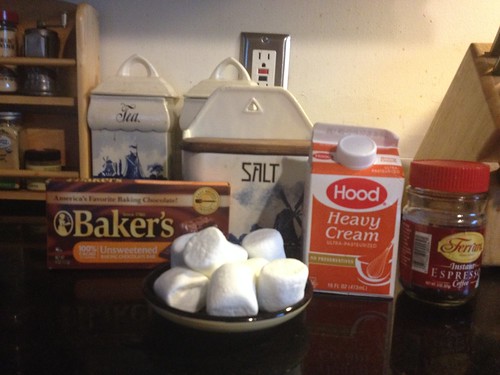 Start by cutting 16 marshmallows into quarters. It’s easiest to use kitchen shears or a knife dipped in hot water. Don’t substitute mini-marshmallows because you’ll end up with the wrong ratio of cornstarch (which coats the outside of the marshmallows) to marshmallow.

Set a saucepan over boiling water and melt the chocolate. Then fold in the marshmallows and a cup of strong coffee and a pinch of salt. I don’t drink coffee so I never have any just hanging about. I made instant espresso instead. Keep folding the mixture.

When the marshmallows are about half melted, take them off the heat and keep stirring until they completely melt. Make sure everything is well combined and let it cool. I stuck the pan into a bowl of ice water to help it cool down faster on such a hot day.

Then whip cream until it’s stiff and fold into the cooled mocha mixture and add toasted nuts. I think toasting nuts before using them is always a good idea; they just taste better. The first time I made this I used slivered almonds since that’s what I had on hand, but hazelnuts add a lovely Nutella flavor. If you’re one of those people who doesn’t like bits of stuff in their ice cream, you can certainly leave the nuts out.

Spoon the mixture into a container — I recommend a metal loaf pan — cover it, and stick it in the freezer. When it’s about half frozen (use your best judgement), give it a stir.

It will take a couple of hours to firm up enough to serve. 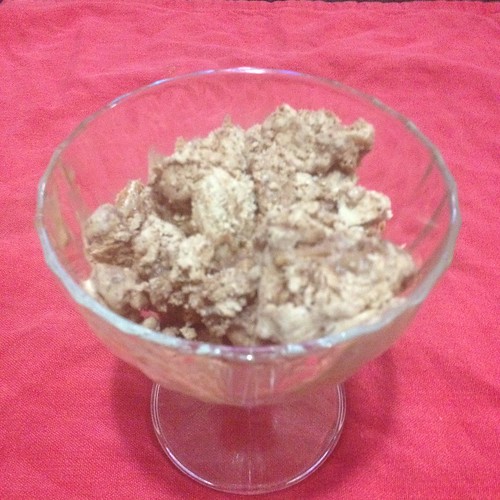 Melt chocolate over boiling water. Add marshmallows, coffee, and salt. Fold mixture continuously over and over until marshmallows are half melted. Remove from heat and continue folding until mixture is smooth. Cool. Whip cream. Add whipped cream and nuts to mocha mixture. Pour into metal loaf pan, cover, and freeze until firm, stirring at least once.