In the Kitchen: Sham-Pain Salad

I’m back in the kitchen for a new challenge! I’ve been cooking with historic recipes for quite a while and I’ve made some crazy things (ham-banana rolls anyone?). I realized there was one particular type of dish I’ve never made* — a molded gelatin salad!

For my first attempt, I chose Sham-Pain Salad from Date Bait: The Younger Set’s Picture Cook Book by Robert H. Loeb, Jr. (1952). It’s aimed at teenagers (that is, teenage girls) so they can impress their friends and parents with their culinary skills. There’s a lot of boxed and canned foods involved. I picked this one because it’s not as weird as some other gelatin “salads”.

I filmed the making of this, so if you are one of my Patrons, you can see the whole thing from ingredients to taste testing. I did the majority of the video editing** (of which I am quite proud) and all the camera work (of which I am not so much) myself. I’m pretty pleased with the end result and have more cooking videos in the works. 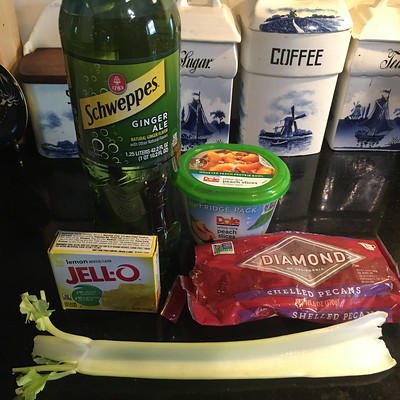 It’s a pretty straight-forward recipe. Make lemon gelatin with hot water and ginger ale and let it chill until slightly thickened. Stir in sliced celery, chopped nuts, and chopped peaches. Pour into a dozen individual molds and chill until firm. Turn molds out onto a lettuce covered platter around a bowl of mayonnaise.

I made a couple tweaks. The minor ones were using jarred peaches instead of thawed frozen ones and using pecans for the generic “nutmeats”. The big ones were cutting the recipe in half, as it served 12, and there are just 2 of us, and using one large mold (a bundt pan, since that’s all I had). 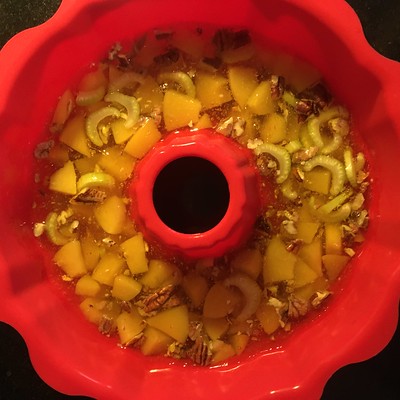 Everything went well until it was time to unmold and it just collapsed. My first gelatin mold was a disaster! Ah well, just keeping it real…

At first I thought there was just too much stuff and not enough gelatin to hold it all together. Maybe the peaches, being jarred instead of frozen, added too much liquid, which kept the gelatin from setting up as firmly as it should have. I should have let the peach slices drain for a while before adding them. In the end, I think the failure was due to the half-full mold. Instead of resting on the platter and having the mold lifted away, it just plummeted out and lost structural integrity.

Despite the collapse and having to serve it in bowls instead of decorative slices, it tasted quite good. The celery is fairly inoffensive, just adding some crunch and no strong flavors. I did try the salad with a dab of mayo, just for authenticity’s sake, but it’s much better with some whipped cream.

If you want to see it all, step by step, in living color, become a Patron! 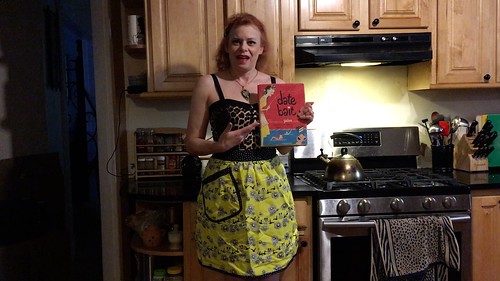 Here’s the recipe as printed, slightly translated because of the pictures in the original recipe.

Sham-pain Salad (serves 12)
WARNING: you must have 12 individual molds

*I did once make a 17th-century layered wine jelly, but that’s not quite the same thing.
**Scratch helped me a lot though. If something is particularly good or clever, it was probably his suggestion.