For a couple of weeks in late June and early July, it’s sour cherry season at The Manor. We are constantly picking, pitting, and cooking cherries from the orchards (all right, it’s just one tree). I’m always on the lookout for new and interesting cherry recipes to add to our arsenal of favorites.

Recently Scratch gave me a clutch of vintage recipe pamphlets which included Good Housekeeping’s Around the World Cookbook: specialty recipes with a foreign flavor. I was surprised at the variety of countries represented and the sophistication of the recipes, especially compared to some other cookbooks of the era and their idea of “international” cuisine.

Hungary was one of the countries well represented with many recipes. Since Scratch was recently in Budapest, Spiced Cherry Soup (Hideg Cseresnyeleves in Hungarian) sounded perfect. It specifically calls for sweet cherries, but of course I used our sour ones. 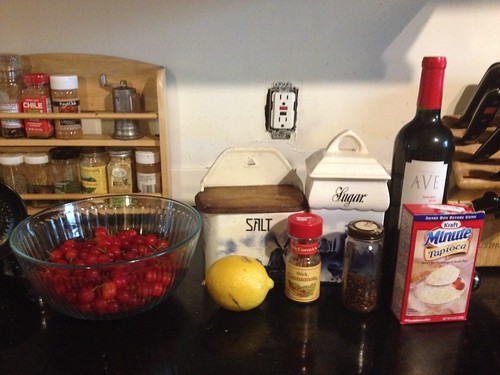 Pit and stem cherries. Remove strips of zest (no white pith) from half a lemon. Stick whole cloves into the peel. Put the cherries and lemon peel into a sauce pan along with a cinnamon stick, some sugar, salt, and water. Simmer. Stir in tapioca and bring to a boil. Add red wine then remove from the heat and allow to cool. Remove lemon peel, cloves, and cinnamon then chill.

Serve cold garnished with a thin lemon slice and a dollop of sour cream.

It make a deliciously tart and refreshing soup, great as a starter or as dessert. The tapioca thickens it, but doesn’t make it utterly gloppy, which I had feared. I think the lemon garnish is optional, but the sour cream (in the original recipe as “commercial sour cream”) is mandatory.

I made only one change (besides using sour instead of sweet cherries). In the original recipe, you add the wine after taking the soup off the heat. I find the raw alcohol taste unpleasant and prefer to let it simmer for another moment or two to cook out some of that harshness.

With vegetable peeler, remove peel from lemon in strips; stick cloves into peel.

Gradually stir in tapioca; bring to boil; then stir in wine; remove from heat; allow to cool. Remove and discard lemon peel, cloves, and cinnamon; then refrigerate until serving time.

To serve, ladle ice-cold soup into individual soup bowls or plates; top each serving with a lemon slice and spoonful of sour cream.

These writings and other creative projects are supported by my 7 Patrons. Thank you so much! To become a Patron, go to my Patreon page.