One of my Advisor Committee tier supporters on Patreon, Adrienne F.,  requested a recipe from the 1920s. I first grabbed a Photoplay cookbook, full of recipes from movie stars of the era, but no dish jumped out at me. Then I remembered I had another Jazz Age cookbook.

The full title is Mandarin Chop Suey Cook Book containing authentic translation of the best recipes of leading Chinese chefs and directions for preparing various popular and healthful Chinese dishes exactly as they are prepared in the Orient. You can take all that with as much salt as you like… It was published by The Pacific Trading Company in Chicago in 1928.

Once again, I have made a video of cooking this dish for my Patrons.

Everything should be sliced thinly,  then brown the meat in a pan with some oil. Then add the celery, water chestnuts, and bamboo shoots and cook for ten minutes. I though this was excessive, and feared the meat would get tough, but followed the instructions to the letter.

Then add the green pepper and mushrooms. At this point the recipes says to simmer until tender. There’s no liquid to simmer. I wonder if you were supposed to add some stock as well, as is done in some of the other chop suey recipes in the book.

Next we add the pimentos and some “Chinese sauce”, which I assumed to be soy sauce, as well as salt and pepper (I skipped the salt because the soy sauce should be salty enough). Lastly some cornstarch in an unspecified amount of water, which would thicken any liquid, but there wasn’t any. Again, an argument for adding some stock earlier in the cooking process.

Serve with chopped almonds on top or mixed in.

It was pretty good, but I would make a few changes if I cooked it again. My fears that the meat would become tough from overcooking were realized and the entire dish really wanted to be saucier. Some of the other recipes in the book said to cook the meat until “half-cooked” and then add the vegetables. Others added half a cup of stock after the vegetables. Both of these would be an improvement. I’d probably also add onions and bean sprouts (and skip the green pepper!), but that’s just my personal taste. 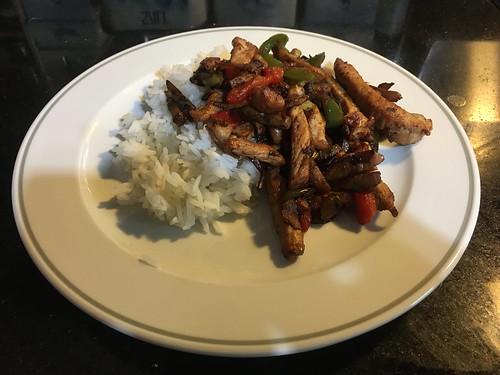 Meat should be cut real small, also all the vegetables.

Have your skillet well greased and hot before you fry the meat. When meat is brown put in the celery, water chestnuts and bamboo shoots. Cook for ten minutes, then add green peppers, mushrooms and let it simmer until tender. Lastly, add chopped pimento, Chinese sauce and a little salt and pepper. Mix cornstarch with cold water and add to the chop suey. You can sprinkle the chopped almonds on top or mix it in the chop suey.

These writings and other creative projects are supported by my 15 Patrons. Thank you so much! To become a Patron, go to my Patreon page. Or you can just tip me if you liked this.