I recently attended the first ever New Orleans Burlesque Retreat, organized by Bella Blue. The participants spent four days living together, taking classes from a number of talented instructors, going to shows, and generally learning a whole heck of a lot. It was an amazing opportunity.

If you’ve been reading this blog, you know that I am all about the continuing education. There were participants with all ranges of experience, from over a decade of performing to some who had yet to set foot on a burlesque stage. The instructors had a variety of different knowledge. It was marvelous. One of my former students once told me she was done taking classes. “Why should I pay for something I can learn from YouTube?” She’s missing out on so much! Human interaction is part of the learning process, both between you and the instructor and you and the other students. One cannot learn in a vacuum. [rant over] 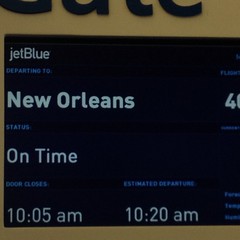 The retreat started on Wednesday. I was extremely anxious because ANOTHER Nor’easter was predicted to hit the East Coast (that would have been the 4th since March started) and knowing airlines as I do, I feared my flight would be canceled. Fortunately the storm didn’t make it up to Massachusetts until long after I was gone.

We were staying in Mid-City, a part of New Orleans with which I was completely unfamiliar, in a pair of apartments that slept 6 each, sharing beds. I got there early and picked the room with only one bed simply because it had a nightstand on which to put my glasses. And somehow I ended up in solitary splendor, since we were ultimately only eleven. I admit I felt a bit guilty.

The first order of business was that we all marched over to the Whole Foods to stock up on edible necessities. I was entertained at seeing what my fellows considered essential foodstuffs (myself: baby carrots, blackberries, and tiny cheeses. Also oatmeal, but I had brought that with me). 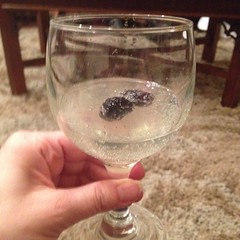 In the evening all the instructors joined us (with bubbly, elderflower lemonade, and fresh fruit) so everyone could introduce themselves. We all had to share what we hoped to get out of the retreat and what we hoped to bring to it. I knew only a few of the people attending, so it was really nice to meet everyone else and learn a bit about them all. 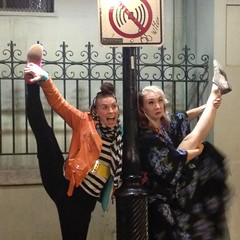 It wasn’t too late when the evening broke up and a few of us joined Miss Audacious, who was meeting up with her friend Juliette Electrique (in town for The Southern Sideshow Hootenanny), on an excursion to the French Quarter. After starting at Cafe Beignet, we went to the Olde Absinthe House in Pirate Alley. We had a lovely time trading stories, posing for ridiculous photos (see right), and drinking Death in the Afternoon (absinthe and champagne). Unfortunately, the door guy decided we were a lot more fun than sitting in a corner not checking IDs (we were the only patrons) and invited himself and his cigarettes to our table and sort of took over the conversation. I was annoyed and also cold and tired, so an exit was the best strategy. I gather my companions left soon after to find a different spot for another round.

It was surprisingly chilly that night — I’d never been in New Orleans when it wasn’t stifling hot. The weather the whole time was on the coolish side and made me glad I’d grabbed my snuggly hoodie as I walked out the door in Boston.

Next up, our first day of the retreat.