Our first live show in front of an actual audience! Although it was a long, hard process to make that happen.

If you’ve been following these chronicles, you know we often perform in lovely spaces which aren’t really theatres. And this was no different. The hall upstairs from the American Burlesque Collection is spacious with a proscenium stage, but it’s not actually a theatre. Scratch and Hunter put in long hours making sure we had decent lighting (and thank goodness they had the luxury to do that instead of scrambling day of).

Still, there was a lot to do. We had to hang curtains in all the (huge) windows, set up the audio equipment (kindly lent by our good friends at Deacon Giles), set up the dressing room, set out chairs, assemble goody bags for the VIP guests, make a sign or two, and of course, rehearse, checking lights and sound as we went.

Our faithful stage manager Marek was working at his farmers’ market in NH (visit if you’re in the area!), so he wasn’t available and we missed him! However, we did have Sarah, the museum’s intern, and Gabe, a cast member for this show, to be the stage crew. And all the performers did their best to help them out with their first show, with Betty acting as a stage manager during the second act when she had a fair bit of down time.

By they way, those lovely signs on the easel that someone had to switch every act, were done by Devastasia.

Of course, it was pouring rain. Despite that we had a good turn out and even some walk-ins. And they were definitely enthusiastic! VIPs got a tour of the new exhibit at the museum — which I haven’t seen yet! — Lights! Camera! Burlesque!, showcasing burlesque as portrayed in movies, burlesque performers who made the jump to Hollywood, and filmed burlesque shows.

The show was a celebration of things summery and patriotic, which a little USO flavor. Alas, there are no photos, so you’ll just have to make do with my commentary. 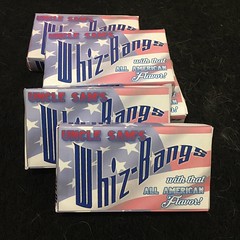 This is a classic burlesque bit, where a fast-talking con man sells boxes of candy by promising ridiculous prizes in some of the boxes. This particular night, being “Bank Night” (sign by Devastasia), there is an additional promise of cash prizes. It’s all a lie. Gabe took the original script and ran with it. In true burlesque fashion, he improvised bits and added some physical comedy. Poor Sarah could barely keep up with the orders and plaintively asked backstage if there were any more boxes of candy. We were stunned that we’d sold all we had in no time flat. Gabe was a more successful pitchman than we expected!
A peek behind the curtain: The Uncle Sam’s Whiz-Bangs (with that All-American Flavor) were actually boxes of Starbursts with a paper wrapper Scratch designed (and your humble correspondent did most of the wrapping. Such a glamourous life!)

Betty Blaize & Mina Murray: The Lion Sleeps Tonight
Such a silly number. We created it in less than a week as kind of a throw-away act. Who would have imagined we’d still be performing it over a decade later *and* teaching it so others can perform it. It’s a bit unusual in that we do a spoken word intro. Also, many of those ridiculous hand-gestures are authentic 16th century mudras from classical Indian dance (of which Betty is an expert practitioner).

Devastasia: Cape Cod
One of the surprises of the Pandemic was learning that Devastasia has a beautiful singing voice. She sang in two of our recorded shows, but this was her first outing before a live audience. She did a wonderful job singing of the pleasures of a trip to the Cape.
A peek behind the curtain: Devastasia did all the audio editing to make the backtrack exactly what she wanted, including adding in the sea gulls and distant harbor bells.

Ava Fox: In The Mood
This was a great stage for tapping, so Ava let loose with this joyful striptease with a 1940s feel.

Betty Blaize & Scratch: Baseballs
A brief comedy bit that leads into the next act. We like to throw some comedy bits into a show in homage to the original burlesque shows, which were not all striptease.
A peek behind the curtain: Although we try to base our comedic interludes on actually comedy sketches from the Gold Age of burlesque, we have to substantially rewrite many of them as they are often too sexist, racist, or violent for modern sensibilities.

Betty Blaize: Stuff Like That There
Keeping with our summer theme, Betty appeared as a devoted Red Sox fan who gets so excited that her clothes come flying off. Betty made the entire costume, including the baseball bra and infield undies.

Scratch: Martini Time
Bottles keep mysteriously multiplying to the bafflement of Scratch and the audience.
A peek behind the curtain: this magic trick is choreographed to the song “Martini Time” by Rev. Horton Heat. However, in tech rehearsal, there was something wrong with the track — this is why you have tech rehearsals! — so Scratch used a different song in performance. Nobody was the wiser; he’s just that good!

Mina Murray: French Champagne
I love this act, despite its complicated set up. I felt badly about inflicting it on our novice stage crew, but they did great! What does it have to do with our theme? I’m cooling down with some ice!

Devastasia: Summertime
This is one of Devastasia’s most beautiful costumes — and has a lot of creativity in the construction!

Gabe: It’s Been a Long, Long Time
We were fortunate that Gabe is a talented pianist, and the venue had a piano we could use, and it was in tune! Marvel fans might recognize this melancholy song from several moments during Captain America’s story.

Mina Murray: Too Darn Hot
I couldn’t do a show without including a fan dance. This one had been appropriate for the weather, until Saturday, of course. It’s always fun to include a little striptease while fan dancing. I used to do this act on a boat for Harborlesque, with Stella Diamond singing, and while I miss Stella, it was nice to perform it on a stage that doesn’t move.
A peek behind the curtain: the “magic” bra is a innovation designed by Manuge et Toi and constructed by me.

Ava Fox & Devastasia: Don’t Sit Under the Appletree
This act was created for L.D.R.: Love in the Time of Coronavirus, but this was its first outing in front of a live audience. Ava and Devastasia are military cuties, with a friendly rivalry.
A peek behind the curtain: Ava made those beautiful fans completely from scratch. She cut the acrylic staves, sewed the fabric feathers, assembled the fans, and decorated them.

Gabe & Scratch: Deductions
Another vintage comedy bit. They laid the groundwork for Scratch as the overbearing boss and Gabe as the put-upon employee during the opening of Gabe’s song above.

Betty Blaize: 1812 Overdrive
Despite the 1812 overture not being about the War of 1812, it has become an Independence Day staple. Don’t ask me why. Betty goes all out with a gambling-themed act including a huge stack of dice that she can climb up on.
A peek behind the curtain: Betty built and decorated those dice herself. She’s also the one who assembles them — if you need to trust the security of a set piece, you need to trust those who set them up. If this sounds like a Friday Tip, it’s because it is.

Ava Fox, Devastasia, Mina Murray & Scratch: Date Night
Another classic comedy bit. We did this one in The BeauTease Holiday Special where Devastasia actually got to say her scandalous last time, since Scratch could bleep it instead of having to interrupt.

Ava Fox, Devastasia & Mina Murray: Stompin’ at the Savoy
This is one of our standard adorable trios. Now that I’m thinking about it I believe we debuted this on the Harbourlesque boat at our tenth anniversary party. We switched up the look a bit so we were in red and in white and in blue.
A peek behind the curtain: Usually I’m in the center position, but I also had a red costume, so I moved to the appropriate end. The choreography is just different enough for the three positions that I had a heck of a time adjusting at first.

And that was the show! And then we had to strike everything and load out, so there wasn’t much time for more than briefly greeting our beloved audience.

These writings and other creative projects are supported by my 12 Patrons. Thank you! I appreciate you all so much. To become a Patron, go to my Patreon page. Or you can just tip me if you liked this.