I’ve got another vintage movie review for you! 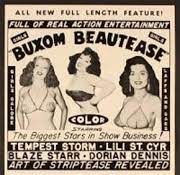 This is another from our vast archive of Something Weird DVDs. It’s a filmed burlesque show (not live), with stripping and comedy, but notable for a few reasons.

First, it’s directed by Irving Klaw, the man behind the fetish photos of Bettie Page. He previously directed Varietease and Teaserama, more famous films with higher production values and appearances by Bettie Page.

More importantly, it is, I believe, the only recording of Blaze Starr doing her signature flaming couch act. However, it seems to be an ordinary chaise with a jury-rigged smoke effect, rather than her actual stage couch with the flames. That you can see at the American Burlesque Collection‘s special exhibit Passion in Action.

The cast has some burlesque luminaries, but Dorian Dennis gets top billing over Blaze Starr, Lili St. Cyr, and Tempest Storm. Hold that thought, we’ll be back to Lili & Tempest later.

Despite the ad copy promising color, the film is in black and white. We’ll get back to that later as well.

This is a very long write-up; for my summary go here.

A charming miss come out before each act with a card listing the name of the performer(s), which cuts to a close-up of the title card. As the film goes on, she gets less dressed. She’s not used to introduce repeat performers.

The film starts with a comedy routine between Gene Doyle (straight man) and Joe Young (comic). It’s mostly a bunch of quick bits. They’re playing in front of curtains, but it doesn’t look like a theatre and it doesn’t sound like there’s an audience.

Blaze Starr heats things up with her flaming couch routine. It look like it was filmed in someone’s living room, maybe a basement set up to look like a living room. She does a slow striptease out of a lot of garments. It’s fun when she rather saucily snaps her garter at the camera. Once she’s down to her undies, she straddles the couch and takes a powder puff out of her evening bag. She awkwardly slaps the powder puff on her armpit, her décolletage, and thighs, then hesitates for a moment and naughtily taps it on her crotch. Finally, she writhes on the couch, and as the camera get close on her face, you get some idea of just how alluring she was on stage. The smoke effect goes off and we hear cheers from the “audience”. She is still fairly modestly attired in a strapless bra and high-waisted panties.

The burlesque continues with Barbara Pauline. She enters rear first and lets the camera linger on her behind sticking out of the curtains at the side of the “stage”. She’s performing on a slightly different living room set, with a sofa. She parades back and forth, stripping from gown and feathered hat to bra and fringed belt to opaque triangle bra and ruffled panties, but no further.

More comedy — a “painless dentist” bit with  the comedy duo and a couple of talking (and screaming) women.

Back to the striptease with Dorian Dennis and back to the living room set. In lieu of gloves she wears some interesting puffed sleeve gauntlets. She gives us a bit of a leg show on the couch. Unfortunately, the camera focuses more on her face during the later part of the act when she’s most undressed (although she still doesn’t go down to pasties).

As the next dancer is introduced, our title girl appears to be naked, hiding behind the card. Eve Adams is performing on a stage set, wearing a striking parti-colored gown which turns out to be a zippered top and open skirt over panels (also parti-colored). At a couple of points, she deliberately pulls up her strapless bra, which had begun to slip. She plays with her hair a lot, which is kind of messy by the end of the act, which made her seem very real. Near the end of the act, she’s clearly saying something, but I can’t make out what it is. I wonder if she’s asking how much longer she has to keep going…

Next up is Patti Paget. The card girl is still “naked” but when she places the card on the easel, you can clearly see her bra and panties although she’s trying to keep her body out of frame. Patti Paget is a fan dancer! Although there is some conceal and reveal, she mostly uses the fans to frame and highlight her body. There’s no pretense whatsoever that she’s nude behind them. There’s a longish bit where the camera just focuses on her legs, which seems something of a waste as she’s doing things with the fans that we can’t see. Eventually she puts the fans down for (I think) a little bump & grind, but now the camera is above her hips.

Gene and Joe return for a trip to Paris where they try out their French on Eve Adams.

A slightly more clad title girl introduces Evonne, who is just waking up. It turns out the ubiquitous couch in the living room set is a sleeper sofa. She slowly gets dressed, pulling on stocking and heels (just a touch of fetish styling here) and discarding her nightgown to give us a leg show on the bed. (She’s also the screaming woman from the dentist bit.) The quality of the film doesn’t seem as good as the rest.

The title girl introduces Rita Grable, then points to herself and beckons us to follow her to the stage. Her costume has lavish layers of tulle ruffles on the overskirt, bodice, and muff.

Blaze Starr takes the stage again in a showgirl costume with a feathered headdress and pearl-encrusted bra. She struts, grinds, and strips, but she’s best when she gets down on the floor, despite all the trouble her fringe skirt gives her. It is made of strands of something like tinsel and it keeps getting caught on the heel of her shoe. Although she frequently squeezes her famous breasts together, like all the previous acts, she doesn’t reveal them.

Trudy Wayne cavorts on and near the couch. The camera is always in very close and I don’t think there’s a single full-body shot in the entire act. The lighting is dim and the film quality is about the same as Evonne’s act.

Dorian Dennis, who had top billing, returns to the living room set. Elegantly dressed, with a fur stole, she opens a compact and powders her face before beginning her parade. As in her first act, she wears a tiny lace skirt which serves as her final remove.

Time for some more comedy! Gene and Joe do a bit with some unusual math and enlist Eve Adams for help.

Up until now the film has been black and white. Suddenly we cut to “Striptease Revealed Starring Tempest Storm”, which is in color! This was a short film Klaw made in 1950.  Presumably he tacked on to the end so he could claim Buxom Beautease had color and stars that the budget probably couldn’t afford. The production values are much higher than the previous hour.

First we see a card (held by a different girl) reading “Starring Lili St. Cyr”. Then a desert scene with Lili dancing in a tent with sheer walls. She exits the tent in a sequined harem girl sort of costume and dances to Orientalist music, looking anywhere but at the camera. She strips down to pasties and net pants, then climbs into her famous bath tub, where she swats at flying bubbles while she covers her breasts with one arm. Discretely screening herself with a towel, she headed back to the tent and from behind its walls, at last reveals all. Or as much as one can see through the sheer tent walls

At last Tempest Storm arrives in all her red-headed glory. The set is nothing to speak of, just some curtains hanging on a wall, but it is in color. Tempest performs one of her signature stripteases, slow and sultry. She ends in a net bra with decorations in lieu of pasties.

tl;dr. This is a very modest burlesque film, both in budget and in the performances. There are 12 burlesque acts from ten performers and 4 comedy sets. The comics aren’t particularly funny. The dancers all end in fairly covering undergarments and none in the black & white section go down to pasties.  If anything particularly risqué is happening, the camera cuts away to focus on another part of the dancer’s body. The dancers themselves occasionally look awkward or bored. The sets are minimal and either pretend to be a theatre stage or a living room.

It’s interesting for the historic value, and for immortalizing Blaze Starr’s signature act, but it’s just not that great a film. I suppose I should watch Varietease and Teaserama next, for contrast.

These writings and other creative projects are supported by my 12 Patrons. Thank you so much! To become a Patron, go to my Patreon page. Or you can just tip me if you liked this.