I know I haven’t been so communicative this month. I’ll try to make it up to you next month, but for now, here’s a quick review. 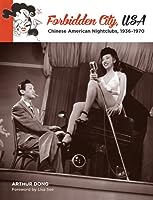 This book is on the same topic as Forbidden City: The Golden Age of Chinese Nightclubs, but it’s also a companion to a documentary, released in 1989. The pages are packed with photos, menus, press clippings, some with wording that may have been cute then, but is cringe-worthy now. The real meat is the interviews with the singers, specialty dancers, and showgirls.

I was most interested in the interview with Noel Toy, the Chinese Sally Rand, who features in my new class, Fan Dance Uncovered (join me on Saturday!). As a nude dancer and later as a stripteaser, she’s the only performer interviewed who did who we would consider burlesque acts. Ivy Tam, a founding member of the Grant Avenue Follies, does mention Coby Yee and scoffs at anyone dismissing her as “just a stripper”. A couple of the others are clear to point out that nobody showed everything, not like American burlesque.

The performers (and one club owner and a choreographer) tell their stories in their own words, which is so precious since so many are no longer with us. They talk about hard word and fun, but also adversity from the more traditional member of their community and war-time prejudices — some of the “Chinese” performers were actually Japanese.

I’ll be looking up the documentary. Reading first-person histories is great, but actually hearing and seeing them is even better.