Scratch got me a copy of Burlesque West: Showgirls, Sex, and Sin in Postwar Vancouver for the holidays, but that’s not the book I’m reviewing. I’ll get to it. Eventually. Early in the book, the author mentioned a book I’d never heard of, I was intrigued, and found a copy. And here it is.

Growing Up Naked: My Years in Bump and Grind by Lindalee Tracey (1997).

Lindalee Tracey began stripping, underaged, in an unspecified Canadian city in the 1970s, a transitional time for burlesque. She worked at Eden with angry, artistic Emma, Ruby who would spread, elegant Yvette who was once on a bill with Lili St. Cyr, and beautiful, bitter Sugar. She discovered the joy and power of dancing on the club stage. She also dealt with backstage jealousies, sleazy management, and a trial for lewdness. After being forced into a humiliating publicity stunt, she left Eden to tour in the U.S. There she discovered some unfortunate truths about Americans, in the industry there and in general.

She returned to Canada in time for the Olympics and found a home in Montreal at the SexOHrama. Some of her colleagues from Eden had also made the move, but their lives and fortunes had diverged from hers. After a while, she began drifting away from stripping to concentrate on her writing. Before she left the business entirely, she founded the Tits for Tots strip-a-thon, which raised both money for a local children’s hospital and the esteem of the participating strippers. Her final project before leaving stripping entirely was to be involved in a feminist documentary, which didn’t quite go as she’d hoped.

Her writing borders on poetic (not surprising, since she also wrote poetry). It’s all present tense, which gives it a sense of immediacy, but it has a misty quality of looking backwards as well. Unlike some other burlesque memoirs, she often looks inward and describes her feelings and emotional experiences, not just events and actions. Her story is interspersed with letters from some of her fans and her own poetry.

One of the aspects I found interesting was the changes in burlesque during the author’s career. When she started in burlesque, features (strippers) were still performing 20 minute sets. Early in her career the author muses on themes and songs for an act. Also, the features never mingled with the audience. It was go-go dancers who hustled drinks for tips. Periodically the go-gos would come on stage for a “paltry” three-song set. Then the go-gos were being brought on stage en masse for what became known as “the meat market”. The features were trying to compete with twenty girls at once (many of whom would “spread”) but also with porn movies being shown in the clubs. Once table dances were introduced, some strippers chose to step down in status to become a go-go for the increase in income via tips. You can see the evolution into the present day strip club.

It’s clear Lindalee loved stripping and what it had been when she started. She felt it made her more, bigger, stronger. She fought constantly against being diminished and demeaned by her employers, the audience, and others who wouldn’t see the power the performers had on stage. When she left, striptease had changed completely and she mourned the loss of what it had been.

Besides her published writings, Lindalee Tracey also made films. At some point, I’ll review her documentary The Anatomy of Burlesque.

I filmed myself reading a short passage from this book, but only my Patrons can see the video. The rest of you will have to content yourself with this photo. 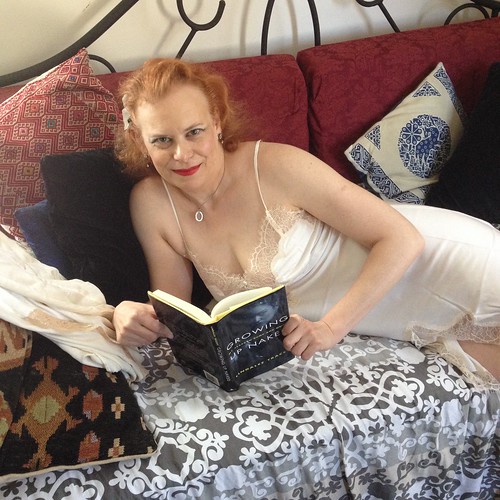 These writings and other creative projects are supported by my 7 Patrons. Thank you so much! To become a Patron, go to my Patreon page.