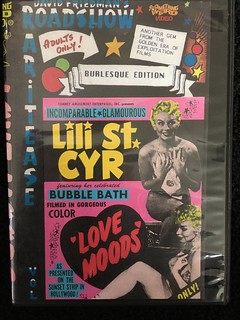 We have a large collection of Something Weird videos. For those not familiar, these are vintage burlesque films released on DVD. This disc is two shorts, each about 15 minutes, featuring Lili St. Cyr: Love Moods and Bedroom Fantasy.

The first, Love Moods: A Ballet Pantomime (1952) was filmed at Ciro’s, the Sunset Strip nightclub where Lili frequently performed. It was directed by Lilian Hunt, the choreographer and talent agent who discovered Tempest Storm. With the stage covered in elegant furniture, including an elaborate bath tub, you get a great idea of the opulence of Lili’s stage shows.

Lili parades around the stage, occasionally throwing in some dance moves, and pouting for the camera. She directs her longing looks at a photo on her vanity. As she prepares to go out, presumably with the man in the photo, she tries on and removes four glamourous gowns and a negligee, as well as jewelry, furs, and other accessories. The centerpiece of her preparations is her famous bubble bath in her gilded tub.

Her striping is the height of tease. The audience never sees more than the slightest flash of her pasties or g-string. She’s always concealed, behind her dressing screen, her garment, a towel, or her maid’s body.

The film is not in great condition, with a number of small jumps; the worst being when Lili’s second stocking mysteriously appears on her leg while she’s dressing at her vanity.

The second film, A Bedroom Fantasy (1953), is a little more like an excerpt from a burlesque show. It opens with The Folliettes, a mob of chorus girls dancing the cancan with more or less skill. After a minute or two this turns into a stately parade as a singer begins crooning off-stage. Then they become a backdrop for the Duponts, dancers who perform a somewhat comedic duet. The Folliettes reprise their can-can and everyone takes a bow.

Now the curtain opens on the main show. Lili is returning to her boudoir after an evening out. The setting is slightly different from Love Moods — instead of an ornate bath tub, she has a lavish bed on a platform. She slowly and expertly strips out of her evening attire and poses languidly on her chaise before putting on her night attire with the help of her maid (a different maid from the previous short).

She dances and poses and even does some calisthenics (gracefully, of course) before climbing into bed. But then the phone rings and she rapturously listens to a singer “on the phone” as she writhes on the bed and wriggles out of her nightgown. The act ends with her going to sleep.

Of the two, I like Love Moods better. She seemed to be having more fun with it. Also, you get to see more outfits, more teasing and, of course, her signature bubble bath. As it was filmed at Ciro’s, this is probably about as close as we can get to seeing an actually Lili St. Cyr stage performance.

The rest of the disc is filled with trailers for other burlesque films, but I’ll be honest — I haven’t watched them.

The performances by Lili St. Cyr highlight why she was such a popular performer in her day and why her legend lives on today. Few performers today come close to matching her opulence and her grace on stage.