Review: Marinka: From Havana To Burlesque

Like the rest of the burlesque world, I was saddened to hear of the death of Marinka, Queen of the Amazons and grateful that she shared the story of her life. 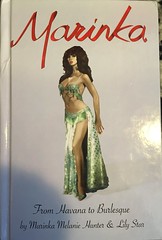 Marinka: From Havana to Burlesque by Marinka Melanie Hunter and Lily Star, 2020.

In this memoir, Marinka is honest about her life, particularly her big secret, which she kept for so long. In her introduction she says “If I had done this when I was 30, it would have been a sensation instead of my story.” I’m certainly glad times and attitudes have changed enough that she felt she could finally be completely honest and tell her whole story without it being lost behind the sensational nature.

Growing up in Havana, as the thirteenth and youngest child of wealthy Spanish immigrants, Marinka was different from other children. A fortune teller declared the five-year-old was born under a “different star”.  Marinka’s parents were worried by their youngest’s effeminate behavior. In 1959, when Castro took power in Cuba, Marinka’s parents thought New York City, where one of their daughters lived, would be a safer place for their flamboyant teenager.

Once in New York, Marinka could finally live as she truly was, as a woman. She became acquainted with the underground gay and drag scene. After being declared “the most beautiful drag queen in New York City” at a ball, she was hired as a female impersonator at The Powderpuff Revue and also learned to belly dance. At this time she used the stage name “Sully”.

Very soon she became an exotic dancer. Her agent had dubbed her “Tina Darling”, but she wasn’t comfortable with it. She heard the name “Marinka” and knew that was who she was. She began working in “mixing clubs” (including the Teddy Bare Lounge and Two O’Clock in Boston), where the dancers would sit and drink with the patrons between acts.

One of her tours took her to Ohio and the Toledo burlesque theatre run by legendary performer and impresario Rose La Rose. Rose took one look at the striking beauty and asked why she wasn’t a feature. Marinka didn’t think she had the act or the experience to become a feature, but Rose La Rose thought otherwise. First, Marinka had to return to New York for something very important.

In December 1969, Marinka entered a hospital for the moment she had been dreaming of — gender confirmation surgery, or as she called it then, a sex change operation. A warning here: she describes her surgery and recovery from it in a fair bit of detail. After jumping through a few legal hoops, she was able to update all her official paperwork to reflect who she really was and chose the name Maria Arias. I’m unclear when she started using the name Melanie Hunter.

Marinka’s burlesque career was taking off. She returned to Toledo and Rose La Rose helped her create a feature act and gave her the move that became her signature — “fucking the curtains”. I loved this chapter because it detailed the different sections of a feature’s act.

From there she became a much sought after headliner. She was a regular at the resorts in the Catskills for many years as well as performing overseas. Bob Fosse cast her in All That Jazz  — you can see her in the burlesque club flashback and in the finale — and that led to an appearance in Playboy. More movie work followed, but only as an extra. Unfortunately, Hollywood was uncomfortable with a transgender actress and she never could land a larger role. But burlesque loved her and she continued performing.

Marinka had many loves and marriages and her share of heartbreak. Like so many burlesque Legends, she fell in love with some charming men who spent her hard-earned money and resented her work in burlesque. She’s not bitter about them, just sad at how things turned out. She had happier relationships too, including at least one with a celebrity.

The pacing is a little uneven. She’ll spend one chapter on a particular incident and then cover a longer span of time in the next. The last chapter of the book compresses a couple of decades into a few pages, as she moved from Switzerland to Florida to Las Vegas and began to have health issues.

There are many sections of photos, from early headshots (when she was known as Sully) to her appearances at The Burlesque Hall of Fame. There are also candid shots with her friends and family, plus a few press clippings.

As always, I recommend the memoirs of Legends, because it is so important to know our past. This book is useful as a look back to burlesque history, but it also happens to be enjoyable and entertaining. The tone is very conversational and her story moves along smoothly. Most importantly, it’s the very personal story of a woman who always knew who she was.