At the end of June, I decided July would be a sewing month and I was going to work on using up my stash. How did I do? Well… not so great.

July was terribly hot and it was frequently stifling in my atelier, so I didn’t get as much done as I had hoped. I only made 3 garments, all lingerie.

First was a vintage-style net bra, which I made from some black netting embellished with gold that I had recycled from a skirt I made ages ago and never wore. No photos of this one yet. Maybe you’ll see it in my new book, hopefully coming out soon. You’ll definitely learn how to make one! 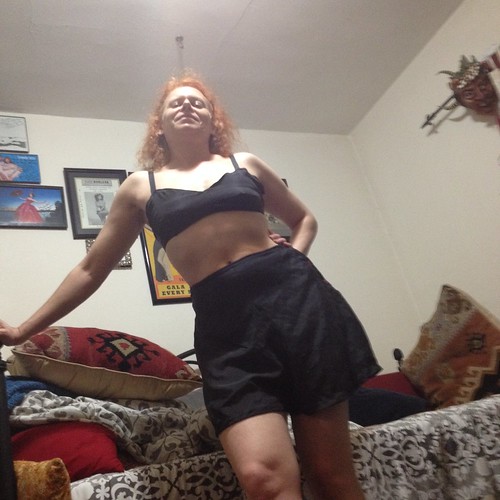 Then I made a bra top and French knickers from And Sew to Bed: 20 Vintage-Inspired Projects for the Boudoir. I used some luxurious black silk and some fun red buttons from my stash for these. I think I had to buy the right width elastic for the button loops on the bra, but everything else I had already. Artsy shot by Scratch. 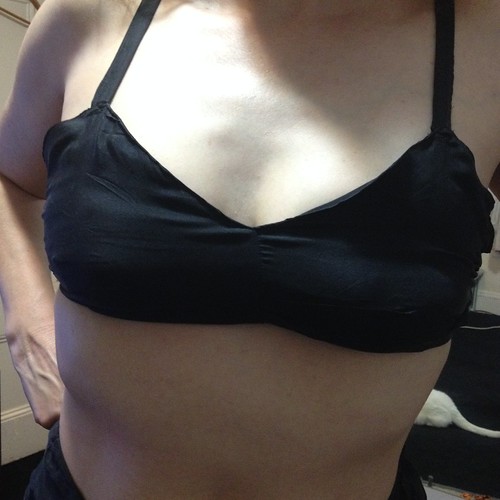 The bra only turned out okay. I didn’t make a muslin first, so it was in progress that I realized the back band was going to be too long and shortened it. After the whole thing was finished, the cups didn’t fit well, so I made some hasty darts, which I don’t love and that tightened up the back band as well, so there’s a gap now. Lesson learned. Anything involving boobs really should get a test fit, but I was feeling lazy. 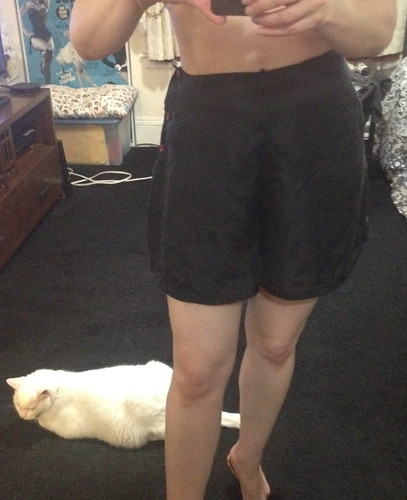 The French kickers (aka tap pants), however, are lovely. They’re cute and comfortable and I love the little red buttons on the side. They should have been much quicker, but I was a total perfectionist here. The waist and leg openings are bound with bias tape and even though the tape is turned to the inside, I just couldn’t bear to use commercial cotton-poly tape. Instead, I made bias tape from the silk. Making your own bias tape isn’t hard with the right tool — a widget that you pull the bias strip through and iron as it comes out with the edges folded under. My problem was that I couldn’t cut a nice, neat bias strip to run through my widget because the silk was so slippery. Scratch, because he’s clever this way, got me a yard-long, inch-wide piece of flat steel and painted one side with grip paint. It held the devilish fabric in place and gave me a nice edge against which to draw a chalk line for cutting.

The big win the whole month has that I can finally make buttonholes on my sewing machine. I have an amazing 1958 Singer Slant-O-Matic 403 Special that does everything I need — except buttonholes.

I mean I could make buttonholes, but it involved a lot of fuss, constantly changing the needle positions and the stitch width and they never seemed to come out evenly. I often resorted to making buttonholes by hand and once to hiring Vixens Ahoy to take care of the many, many buttonholes on a blouse I made.

A friend tipped me off that Singer made a buttonhole attachment back in the ’50s and I easily acquired one on eBay and it sat in a drawer for a long time. Now I had to learn to use it. It’s really clever! There are little cog-wheel templates that move the needle in the shape of whatever buttonhole you want. And the set I bought not only had all the original parts and the instructions, but extra templates and even a sample strip the previous owner had made of all the sizes. I’ll admit my buttonholes weren’t perfectly positioned, but they looked great and work just like they are supposed to. My next goal is to learn to use all the other sewing machine feet and attachments that I’ve never tried, like the ruffler.

Not a great month in terms of churning out stuff and winnowing down my stash, but I do have some really decadent French knickers. I still have some of that black silk and I want to make a camisole to go with them instead of the less-than-lovely bra top. More importantly I have some new tools and new skills.