I just got back from Stripper’s Holiday in Los Angeles. I have a lot to tell you. Also, a lot to think about. I think rather than my usual chronology, I’ll be writing this up by theme.

First, what is Stripper’s Holiday? It’s a burlesque master class run by Michelle L’amour. The participants stay with her for almost a week and work on honing their craft and refining an act. I’ve been trying to do this for years, but never managed to get in. It fills up FAST. That’s why I signed up for the New Orleans Burlesque Retreat, because I knew Stripper’s Holiday was unlikely to be in the cards for me.

However, after I’d committed to going to New Orleans, Michelle announced to her on-line students that after a year off she was ready to do Stripper’s Holiday again. I took the weekend (which happened to be the Expo) to wrestle with my schedule and finances. I came to the conclusion that this opportunity might never happen again and sent in my deposit.

It was a very dense experience, with a lot to process, so I’ll start with the easy stuff, what I did before and after the actual event. 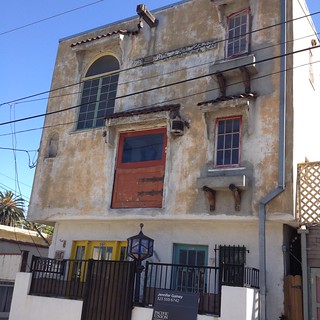 I arrived Wednesday afternoon after a super-easy flight that even landed early and headed directly to the home of Kitten Natividad, Miss Nude Universe, star of Beneath the Valley of the Ultravixens, Burlesque Legend of the Year, and dear friend. It was so good to see her and to visit her historic home (the photo on the right). She gave me some very generous gifts (which you may see in the future). I had brought her a jar of my home-made sour cherry jam, but it was hardly equivalent. She also took me out for Mexican food and kindly drove me to the Stripper House. There I joined the others and Stripper’s Holiday officially began for me.

There will be a lot more to come about what went on during the Holiday, but that is for another day.

Jump to Sunday… After we checked out of the Stripper House, I went to The Magic Castle to meet Lili VonSchtupp. Her beloved, Funny Eddie, was performing for the brunch crowd and she saved me a seat. It was such a treat to see him on stage — he’s very talented and, as you might imagine, funny. There are a lot of kids at brunch time and Eddie was great with them, but it was just as entertaining for the adults. Despite not having a ticket, I managed to get a seat in the Palace of Mystery for the big show, which included Caramel Machine, a hilarious duo from Japan and Tempei, a magically talented juggler.

The best part was sitting in the bar with Lili and catching up on everything. I got to hear all about her hosting at Viva Las Vegas with Elvira and the inside scoop on the amazing balloon gown she wore. We talked about all different aspects of burlesque — performance, teaching, business. It’s a delight to be with her. She said some very lovely things to me that I treasure.

The Castle kicked us all out so that they could reset for the evening, but I had time to kill until my evening plans. The wonderful staff was good enough to hold my suitcase while I wandered around Hollywood, being a tourist. I had never been to the Chinese theatre to gawk at the handprints before.

Next I headed to see my friend Professor H. who I’d caught up with in New Orleans last month. We had an amazing dinner at République and I got to hear all about her latest projects (one of which is SO COOL, but I’ve to keep mum about it) I’m not sorry I left academia, but sometimes I miss being a scholar.

After she foisted some of the leftover cassoulet on me and we said farewell, I had a hideous ride to the airport and ended up RUNNING through LAX. I managed to board my red-eye maybe 5 minutes before they closed the doors and promptly passed out until we landed in Boston. When I left it was basically winter and now spring was in full flower.

Much more to come…