I’ve been writing about my time at Stripper’s Holiday. It was such an inspiring and humbling experience and it’s been taking me a long time to find the right words. You can read about it here and here.

This is why we were all here: the work. For three days we spent four hours a day in the studio. We started two of the sessions with a killer warm up. I was grateful for my personal workout ethic so it didn’t actually kill me, because that was just the start of the session. We also worked on technique and choreography. On the last day we were treated to Michelle’s Pussy Confidence and Sensual Movement classes.

One of the things we talked about in the Pussy Confidence class was vulnerability and how vulnerability is strength. So, here’s some vulnerability. This stuff was really hard for me. I don’t pick up choreography quickly. I just don’t have a 5-6-7-8 brain and it’s hard for me to hear the beats of the music sometimes. I learn choreography by incessant drilling and really burning it into muscle memory. But like I kept telling myself, if this was easy, I wouldn’t need to be there. It was good for me to move *way* outside my comfort zone, but it certainly was frustrating. I wanted to work on refining details, but I needed to absorb the foundations first.

Here we all are after the first day:

Photo by One Chance Fancy.

Before I get to the centerpiece of the studio work, I want to mention a couple of related things we did at the house. One night after dinner we had “Idea Day” (I guess really “Idea Night”) where everyone went around the table and would share an idea they had for an act, usually just one element, like a song or a concept, and would get thoughts and feedback for a direction to go in. I was a complete blank and then I remembered my Hedy Jo Star peacock costume, which deserves to be back on stage. I’ve got some good ideas now; we shall see if they come to fruition. Also, if Scratch is willing to build some set pieces…

Also, before we went into the studio on the last day, Franky ran a meditation on beauty, which was also about imperfection. It was lovely and very pertinent to our work. We were supposed to consider a work of art and the first one that popped into my head was a Hellenistic statuette dancer, which I’ve loved for a long time. Kind of appropriate in many ways.

Back to the studio now…

Everyone brought an act on which they wanted to work. During the first two days we each presented our act and got feedback. On the last day we all presented again, showing how we incorporated the suggestions (a couple showed different acts instead). I was in the first group to present. I was nervous, but glad to get it over with early. I brought my newest act, which had just debuted in December (photo by George Ross of me performing it at The Expo). I thought it was pretty solid, but needed some oomph. After I showed it, Michelle made some very good suggestions, but I felt like I had to burn the whole thing down and start all over. The element I was using as a hook to hang the whole act on had to go.

When I got back to the house, I made an alteration to one of my costume pieces and played with it a little. After studio time the next day, I brought the whole act down into the home theatre room and ran it again and again, trying out Michelle’s suggestions and working on some stuff for the weaker parts. I realized I didn’t have to burn it down after all. A lot of the structure could stay as it was; it was the details that needed to change.

I filmed my last run, as best I could with my tablet, and sent it off to Scratch, because I was filled with self-doubt. He didn’t give me any feedback, just told me to be true to myself, since I was the one who was going to have to perform it. And reminded me that I was good at this and to have faith in myself. That bolstered my confidence a bit (and maybe made me cry a little). Still, I was up early the next morning, working on it again.

On the last day we all presented our acts again. I know this was more nerve-wracking for some than the first time, because there were a couple of camera people there for a project of Michelle’s (no, you’re not going to see the footage). Once I started performing I just tuned them out — I was nervous for all sorts of other reasons! Michelle had lots of praise and more suggestions. I felt a lot better, but knew it wasn’t there yet. Parts were stronger, but I still had holes to fill. I’m still working on it, in fact. 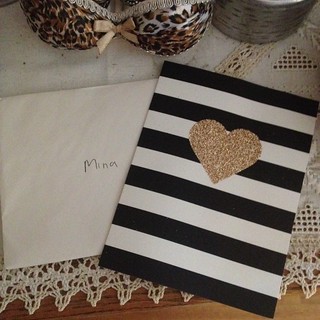 On our very last morning, Michelle gave everyone handwritten cards. It was a sweet touch and made the whole time even more special. This is a treasure I’ll return to when I need encouragement.

On the whole, this was an incredibly challenging time, but challenge is a good thing. I learned a lot on many levels. I got to see a dozen other performers with very different styles (which was an amazing experience) and see them also be vulnerable and put their work out there to be critiqued. Hearing the feedback they received also gave me new ideas and insights. I know that other people were nervous and insecure, which gave me comfort that I wasn’t alone.

I’ve admired Michelle for such a long time and working with her on such a personal level was intimidating to be sure, but also kind of liberating. She’s a very honest person, which I think encouraged honesty in others. The experience was very intense, with a lot crammed into 3-plus days, physically and emotionally. I’m still fumbling for words, but I promised myself I’d send this out today no matter what, so these words will have to do.