This past weekend we finally opened our show The Big Time. It feels like we had been working on it forever. Well, it has been several months and we were often working outside of our normal rehearsal times.

The theme of the show was big props, and everyone built their own with help from Scratch. he had been pretty adamant that he would help and teach, but not actually do the construction. After all, there were 7 props being built and he couldn’t do them all. We used power tools, we used hand tools, we cut, we drilled, we sanded, we painted. We worked with wood and with metal, with plastic and papier mache, even electronics.

Here’s the results, in brief. I wish I had photos, but we were a little too busy to arrange for that.

Betty Blaize and Ruby Foxx: Spiderweb
This was one of the two existing acts which used one of three existing props. Betty is an old hand at getting trapped in the web, but Ruby was new to the spider role and she did a great job.

Pearl Buttons: Steam Heat
There’s no simple word to describe Pearl’s prop. It was two sets of stairs with a platform in between them, kind of like a bridge. She merrily danced up and down the steps and sprawled fetchingly on the platform.

Ruby Foxx: Orange Colored Sky
Besides being a stripteaser, Ruby is also a singer and she belted out this entertaining piece.

Jeannie Martini: Piggy Bank
Jennie was dressed in layers of money, which she stripped off and dropped into her adorable over-sized piggy bank. Piggy is cleverly made from two half whiskey barrels and many cute decorations.

Scratch and Devastacia: Wall of Death
You might have seen Scratch doing this whip act before, but never with such a scary looking Wall of Death. Credit to Devastacia’s new-found skill with a nail gun.

Cara Siobhan: Waterfall
Cara got off easy in the prop construction department as we already had a free-standing doorframe that she modified to be her waterfall, but she challenged herself nonetheless. A novice seamstress, she sewed a hooded cloak with a lengthy train that flowed like water.

Mina Murray: Heavenly Body
I got to ride a shooting star! In reality, it’s a steel frame with a very solid wooden top, draped with black velvet and a shooting star mounted to the downstage side. It’s festooned with color-changing LED lights. I even have glowing reins for riding it. I admit that Scratch did much of the work, although I did cut the pieces for the frame and attached them together. With much cursing.

I’m really, really happy with how it came out. And I just love my costume. It’s the corset I made for Costume-Con, plus matching bra, panties, and garter belt and a poofy swirly skirt (6 layers!). Still needs some more rhinestones…

Betty Blaize: Getting Lucky
This is Betty’s new number and I think she did the most construction work by herself of any of us. She built a towering stack of dice that she can climb, making her the tallest thing around, as she prefers. She also gets credit because her prop breaks down rather compactly.

Ruby Foxx: Hard-Boiled
Ruby, as a femme fatale, stepped out of a pulp detective novel. Literally. Her prop was a huge book with a cover that swung open.

Scratch: Martini Time
Here Scratch magically made vermouth bottles multiply until his table was covered with this. Not big in size, but big in numbers.

Pearl Buttons: Picture of a Ballerina
Like a Degas painting come to life, Pearl started behind a picture frame (seen here with a scrim in place) and danced her way into the real world.

Devastacia: Candelabra
Devastacia is so hot, she makes candles light up without even touching them (thanks to a little magic from Hunter). She’s a terrific artist and you would never realize her candelabra started its life as PVC pipe and newspaper.

Cara Siobhan: Why Don’t You Do Right?
Cara is also a talented singer and she crooned this classic tune.

Mina Murray: Midnight Bath
My beautiful, beautiful bath tub. It should get a post all its own, because it’s been a saga. I’ve wanted a bath tub since I started doing burlesque and I am so, so happy with everything about this act.

Scratch took this picture in rehearsal and I just love it: 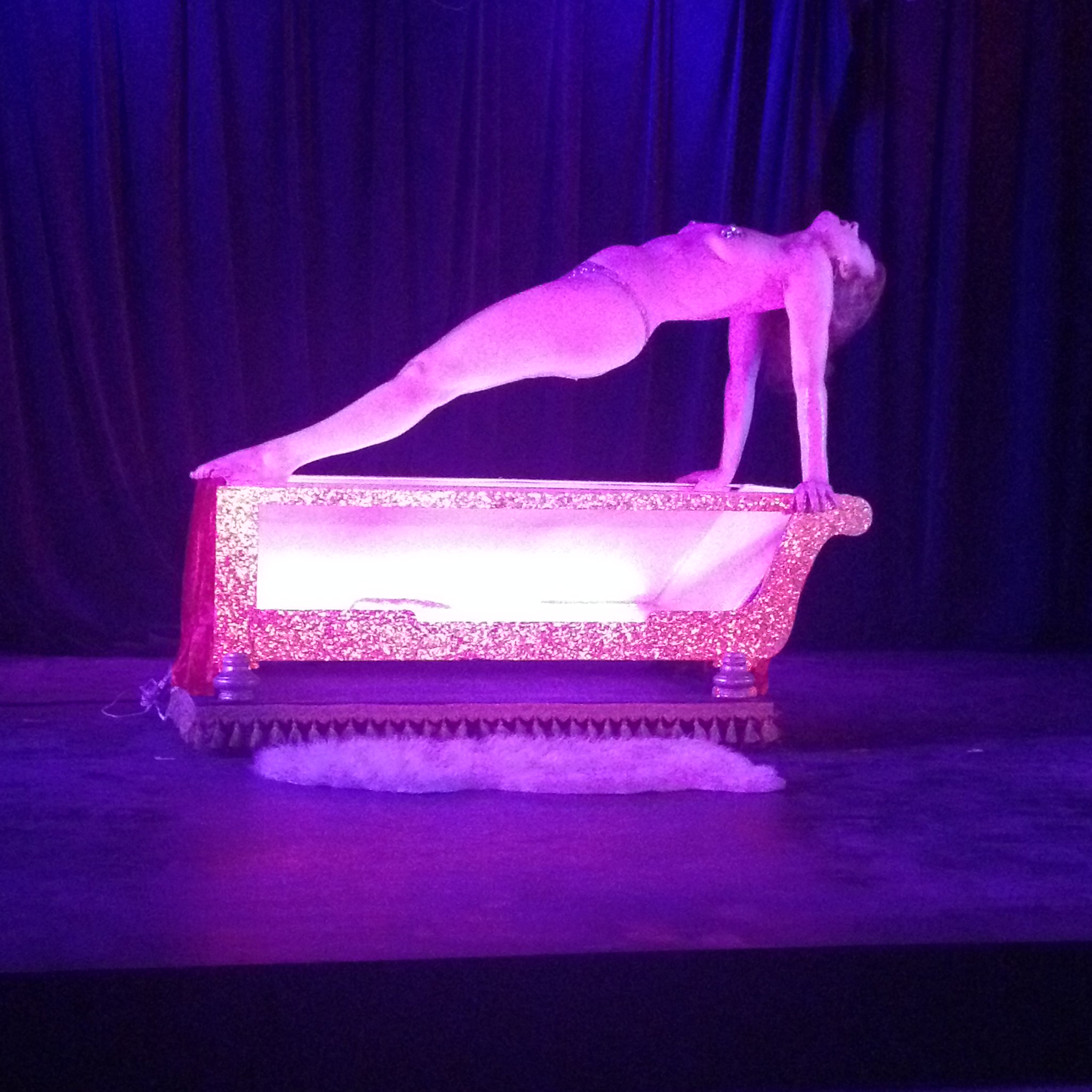 We had our curtain call to a piece of music called “Big Noise from Winnetka”, kind of an inside joke for us.

Sadly, our usual curse was upon us and, despite trying to get video, technical difficulties kept that from happening. Someday…