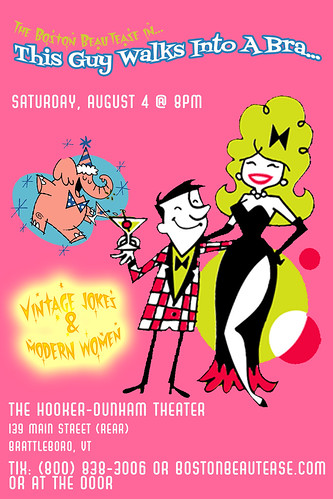 This show was a little different from our usual fare. Instead of having Scratch between each act, we did some vintage burlesque comedy sketches. The show was very fast paced and a lot of fun.

Burlesque comedy is rather challenging. Much of the original material is problematic in various ways. First off, most of the lines were meant to be delivered by a Straightman and a Comic, although some sketches had even more male characters and some had a female role or two. We only have one guy, so the sketches had to be adapted for women to play some of the roles. Unlike the 1940’s, no one is going to think it unlikely for, say, a straightman cop to be played by a woman.

The real problem is that much of the material is incredibly offensive to a modern audience. It’s often horribly sexist, basically misogynistic, it’s racist, it’s violent (many sketches end with one character shooting the other), and sometimes the humor is so dated that a modern audience just doesn’t get it.

Scratch searched though tons of authentic burlesque and vaudeville comedy bits to find stuff we could edit and adapt. Sometimes the characters were made all female (as mentioned above). Sometimes the language needed updating (but not too up-to-date; we didn’t want to lose that vintage feel). Sometimes Scratch pulled bits from several different routines and strung them together into a single sketch. And occasionally he stole bits from later sources (like Airplane and Laugh-In). 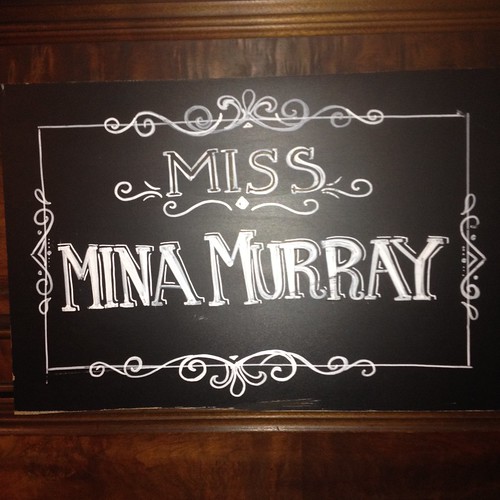 Something else we did differently for this show — title cards! Back when we did Madame Burlesque, we had title cards for all the acts, which the stage kitten would place on a lovely easel. We wanted to revive that, but it starts getting expensive to create new cards for every act. Devastasia had a great idea — chalk boards. So Scratch took a bunch of thin board covered with chalkboard paint, cut them to size, and Devastasia went to town with her chalk markers. She made these beautiful cards for each performer. The cards add a nice vintage touch, but for this show they Served a practical purpose. We didn’t have traditional MC introductions before each act because of the comedy sketches, so the cards gave the performers their due credit.

The show itself was quite lively and our audience, though small, was enthusiastic, despite the heat. I don’t know about them, but we were all wilting backstage. We got. A lot of nice compliments, but none better than the woman who could only stay for 15 minutes but said she couldn’t miss the chance to see The Boston BeauTease. Perhaps we’ll return to Brattleboro, when it’s cooler.

Next up, I go to Winnipeg International Burlesque Festival to perform and teach and The BeauTease present The Bananaz Variety Hour at Deacon Giles Speakeasy Lab!