After a really intense week of working on and performing in Vamps After Midnite, I’m glad for two days off. We’ve got four shows next week — get your tickets now!

In the show I play the Mother Superior of an order of vampire hunting nuns, The Little Sisters of the Thrusting Shaft, and spend most of my time wearing a wimple. I can’t actually style my hair because of it. However, at the end of my first scene, due to a “pointless flashback”, I remove my habit and wimple to perform La Vie en Rose. Usually I just have a single hair ornament for this act, but I wanted something to cover my boring (and flattened hair). Time to make a headdress! (Because it all came together so quickly, I forgot to take progress shots, so these are after the fact.) 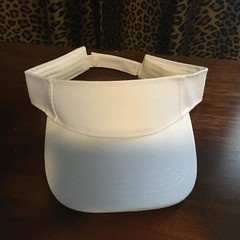 I started with a cloth visor, like this one. Amazon said the one I bought was “rose”, but when it came out of the package, it was bright pink. That certainly would not do! I started to overcomplicate things by making plans to cover it with more appropriately colored fabric.

But then I remembered this stuff! 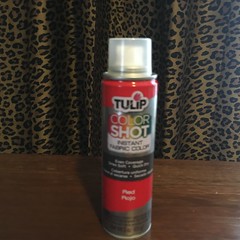 Perfect for a quick & dirty project like this. A mere few minutes later the visor was red. 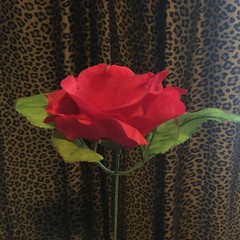 While waiting for the paint to dry, off to the dollar store for a bouquet of roses. The first step was to cut them apart from the central stem, using a wire cutter. Then I grabbed my hot glue gun.

My initial plan was to treat the roses like feathers on a showgirl headdress, but that meant the flowers were basically in profile and I decided I wanted the open blossoms to be visible. Also it was just a little ridiculous looking. I mean, more ridiculous than I was willing to wear. Fortunately, it’s easy to remove hot glue.

I clipped the roses completely off the stems and glued the calyx to the visor, tucking in some leaves to fill a couple of gaps. I covered the band with more leaves. After wondering for a bit how I was going to finish the back of the visor, I glued on two rows of individual petals. Then just because I could, I added a few red rhinestones here and there on the roses. 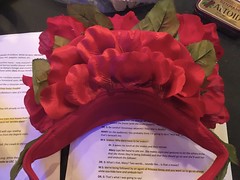 Voila! Active construction was about an hour (not including letting the paint dry or the walk to the dollar store and back) and I wore it in that night’s show. 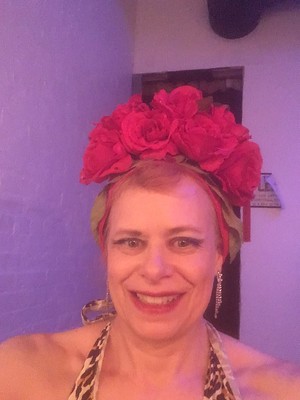 This was taken post-show, since I don’t have any downtime during the show while I’m wearing the headdress in which to take a photo. You can see it in action this Wednesday through Saturday at Vamps After Midnite!

These writings and other creative projects are supported by my 12 Patrons. Thank you so much! To become a Patron, go to my Patreon page. Or you can just tip me if you liked this.