I’m sorry this has taken so long to write, but several crises interrupted my life after I returned from Manitoba, Canada to perform at the 3rd annual Winnipeg International Burlesque Festival. It was a great time.

First of all, I love to travel to perform. I especially love to go places I’ve never been before and Winnipeg was definitely on that list. I’m delighted to be able to say I’ve now performed in three Canadian provinces (and visited a fourth).

I realized this was going to be a bit of a whirlwind trip, just under 48 hours, so I decided I could do the whole thing with a carry-on. It was only one costume, albeit a very full gown and a fur wrap, and no props. And bonus, I didn’t have to pay to check a bag.

I arrived Friday morning after a disgustingly early flight and was really grateful that the hotel not only let me get into a room before check-in time, but they upgraded us to a suite to do so. My roommate for the weekend was the delightful Ruby Mechant, who also played tour guide a bit, as she had been to the festival before.

My performance slot was Friday night. It was early in the first act, so I didn’t have too much time to fret as I waited to go on. The venue is very nice — raked seating, real dressing rooms with lots of mirrors, huge stage, great lighting. It’s called Gas Station Arts Centre, so I assume it was once a gas station, but you couldn’t tell. 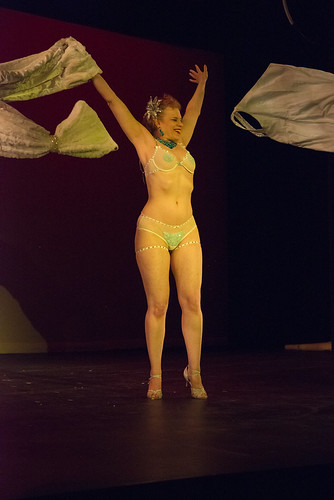 My performance (Mina in Furs) drew lots of cheers during and lots of praise afterwards. The audience was so great and I was so into performing, that I completely forgot the moment early in the routine when I scoop up my fur stole (I enter with it dragging behind me) until the moment that I was supposed to fling it off myself again. I was really kicking myself and I can’t bear to watch the video. However, I do love this action shot from Dano Tanaka.

After intermission I slipped into the theatre to see the second half. My favorite act of the night was Delilah’s Le Morte de Corbeau. It’s a simply stunning performance and circumstances have prevented me from seeing it from the audience until now. 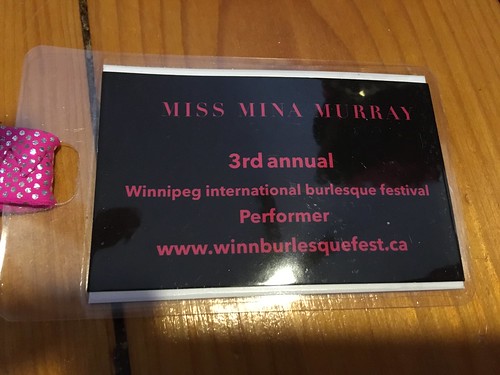 I know it’s a cliche to say that Canadians are nice people, but everyone I met at the festival was SO nice and welcoming. We got these cute handmade swag bags with useful little items, like a notebook and glitter. Oh, and a performer badge! I love those. There’s something about having that round my neck and flashing it to the ushers or security that makes feel like a rock star.

Saturday afternoon were the workshops. I’m really grateful to Dixie Cups for rearranging things so that I could teach “Who’s Who in Classic Burlesque”. She went out of her way to get me on the schedule and to make sure I had a projector. Communicating about these arrangements was hampered by the fact that apparently my email no longer likes to talk to Gmail, so I doubly commend her patience with me when it seemed like I was ignoring her emails.

We had a great turn out and I was so thrilled that my slide show worked perfectly. I mention this because I agonized over it. I had upgraded my slideshow to include video clips of the performers, which worked great on my computer at home. However, I run the presentation off my tablet when traveling and no matter what I tried, I could not get the videos to play. Thanks to a suggestion from Scratch, I saved all my slides as images and dropped them and the videos into a photo album resident on the tablet. Not only did it work, but I was having data issues, so I wouldn’t have been able to reach anything cloud-based anyway. Oh, technology!

Saturday night I got to relax and just enjoy the show. Best of all, I got to catch up with Delilah, whose company I always enjoy. The show was, as usual for festivals, a mixed bag. There were acts I liked very much and some that were not to my taste at all. I’m always happy to see the different styles and get some inspiration. I was a little surprised that several of the performers, particularly the invited guests, did the same acts on Friday as on Saturday. It seems like an odd production choice when encouraging the audience to buy tickets for both nights. The audience did get their money’s worth, however. The shows were good and long with, as I said, many different styles of performance.

I reluctantly skipped the after-party, since Ruby and I had to get up pretty early the next day for our flights back to the States. And before I knew it, I was home.

I’m glad I went. Not only was it a lovely experience, I can’t think of any reason I might have otherwise ended up in Winnipeg. It’s great to experience new places. I’m hoping to continue traveling in the year to come. (Hint, hint — book me…)