Making Do and Mending 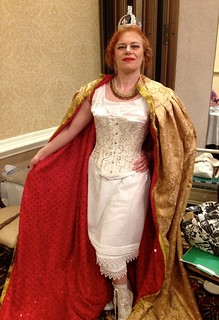 A few years ago I made a costume for the Historical Masquerade at Costume-Con 33. You can read all about it here. Short version: what if the Victoria’s Secret fashion show was actual held in the Victorian era. Thus, Victorian Secret! I made a historically accurate Victorian corset — that is, accurate in pattern and construction, not the thousands of rhinestones decorating it — and drawers and a chemise. The mantle and crown are because my theme was Victoria’s coronation.
(Photo by Ken Warren) 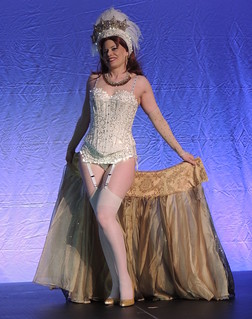 I spent a lot of time and effort on the corset because I knew I’d use it again in a burlesque costume — which I did. I also entered said costume at Costume-Con 37 and you can see it in our show on April 30. However, I didn’t think I’d ever wear the drawers and chemise again. I hated to just have them hanging in the closet, but it’s not like I frequently wear Victorian attire and they were vital to the costume presentation.
(Photo by Anthony J. Colega)

I realized recently that the drawers and chemise would make great summer lounging attire. It gets hot in my atelier, despite the ceiling fan the ever-thoughtful Mr. Scratch installed, and the underthings are made of thin, nay, even  translucent, cotton (I’m wearing pasties under them in the above picture. Just in case). The pretty pintucks and lace are just a bonus.

Unfortunately, the drawers had fallen off the hanger to the floor of my closet and during a mouse infestation, got nibbled. There were wee holes chewed hither and yon. The good news was they were only on one leg. The bad new was that they were so numerous and wide-spread that patching was not an option.

Fortunately, I had just enough cotton left over to cut one new leg. Then I stalled because I really didn’t feel like doing another set of pintucks, especially when the first ones were so even and matched so nicely on each leg.

Because the fabric is so sheer, the seam allowance was visible from the outside if I pressed it open, so I flat felled the seam toward the tucks and sewed it down with very teeny hand stitches behind the first pintuck where the extra fabric hides the seam. 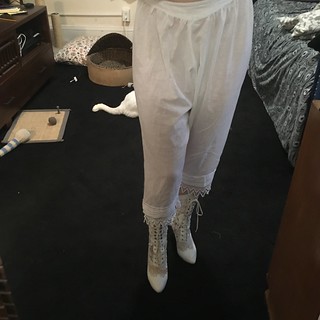 Tada! I can’t even tell which leg is the mended one unless I turn the drawers inside out. I’m glad I was able to salvage these from the ravages of rodents and I’ll have something cool and comfy to wear this summer whilst I sew.