I’m sorry it’s been so long since I shared a recipe with you. Last month was kind of a crazy one and I was barely in the kitchen. However, there should be more cooking in the near future.

You know I love old cookbooks of any kind, but when it comes to 20th century cooking I have a particular fondness for the recipe pamphlet. My collection includes “100 Delicious Walnut Recipes” by the California Walnut Growers Association and “The Exciting World of Rice Dishes” from Minute Rice.

A couple of years ago Scratch bought me two pamphlets that were clearly part of a series, created by the Culinary Arts Institute. Earlier this year I found two more. And now, thanks to eBay… 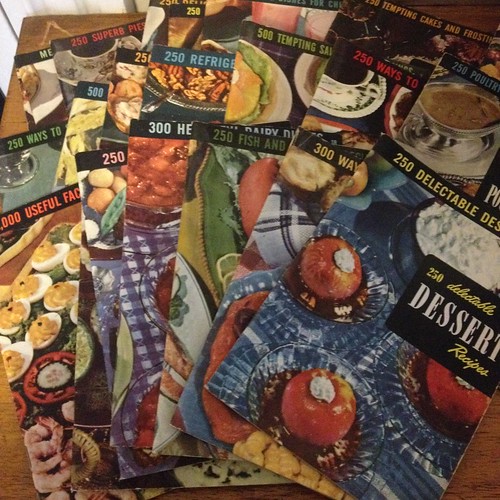 I have them all. 24 pamphlets to add to my cookbook project. In this project, which has been going on for years, I need to cook one recipe, which I’ve never made before, out of every cookbook in my collection. This project brought you such delights as Frozen Fruit Salad, Cashew Chicken, and Peach Mousse.

As of last week, I had 130 cookbooks in the project and I only needed to cook from 2 more of them to have completed the project (for now)! Then I added these pamphlets to the collection…

Fortunately, I’ve already cooked from three of them and two of them have no recipes (one has menus, the other food facts), but that still means I’ve got a lot of recipes to make. Perhaps some of them will even make it onto these pages. Perhaps some Luscious Refrigerator Desserts or Superb Pies and Pastries. So many possibilities!