The Story of Buddy Wade

As I was writing my Friday Tip about research, I was going to included an example of an uncorroborated statement and fell down one of those rabbit holes I mentioned.

On page 240 of Striptease: The Untold History of the Girlie Show, Rachel Shteir writes of strippers with tragic ends. “Buddy Wade’s tap shoes caught fire, the sparks ignited her costume, and she burned to death one night at the Old Howard in Boston. Walter Winchell wrote a column about her commemorating her courage for not getting near the other performers.”

That’s it. No footnotes. Not even the date when this event occurred. I always thought it was a little weird — her tap shoes caught fire? Boston historian David Kruh was also puzzled and contacted Ms. Shteir to ask for her sources, but she was unable to provide any.

For years, that’s where it stood. While writing the Tip, I thought I should see if I could find any confirmation before dubbed the story fiction. I had my doubts about finding any evidence. Like everyone else, I’m stuck at home and can’t go to the library, so I had to try my luck with the Internet.

After striking out a lot, I hit on the key search word — “chorine”. From there I found an issue of The Billboard from December 26, 1936. In “Events of the Year” under the “Burlesque” section, dated January, it says “Buddy Wade, chorine, died from burns received on the stage of the Howard, Boston, a heroine in preventing spread of blaze.” Now I had confirmation of the kernel of the story, if not all the details, and better yet, a year!

Now I was able to find the Winchell column. Walter Winchell didn’t actually write about her. He published a letter from a Boston Post reporter who couldn’t get the story in his own paper. I found more information; Scratch found some too. I’m still hunting.

She was 23, a miner’s daughter from Shenandoah, Pennsylvania who started in burlesque in Philadelphia. Under the name Buddy Wade, she was performing in the chorus of the Merry Maidens burlesque show when it came to the Old Howard. Also on the bill for that show was Countess Vanya with her “Dance of the Bats”, Chang Lee in “Dance of the Chinese Lamps” and comics Harry “Hello Jake” Fields and Hap Hyatt. 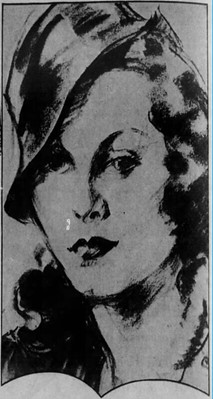 On Friday afternoon January 10, 1936, the chorus was about to go on for a ballet number, after stripper Margot Lopez. A spark fell from an arc light onto Buddy’s tulle skirt and began to burn. Rather than panic and run past her fellow dancers in their tulle skirts, she pressed against the brick wall of the proscenium and headed backstage to a place without anything flammable. With burns over most of her body, she was taken to Haymarket Relief, an outpost of Boston City Hospital. Unfortunately, she succumbed to her injuries. Before she died, she spoke to Boston Post reporter Allen Lester and supposedly asked if she had spoiled the show.

The drawing is a self-portrait, published along with her story in the Detroit Free Press.

Lester sent her story to Winchell to make sure people knew of her courage. Presumably the management of the Old Howard had no interest in having their audience know how close they came to a theatre fire and perhaps kept the story from running in the local papers. Lester mentions the “Iroquois theatre catastrophe” of 1903, which in 600 people were killed in a Chicago theatre when an arc light sparked, igniting a muslin curtain. Buddy Wade’s sacrifice may have prevented just such a tragedy in Boston.

I’m still looking for more information, like confirmation of her birth name and the date she died. I’d also love to find a program from the Old Howard for that week. I’ll update you if I find anything new!