I performed “The Stripteaser’s Education” at Hot in Topeka’s fundraising show in June. It’s an act that’s been around for a long time and seen some changes.

It’s adapted from Gypsy Rose Lee’s famous talking act. Rather than do a strict recreation, we changed and updated some of the wording. She references people and places that wouldn’t mean anything to our current audiences. Our version has changed over the years and we’ve thrown in a few New England references. For example, Gypsy used to say she’d attended Sweet Briar; I say Wellesley. Neither statement is true.

When I performed it in Topeka, I checked with the producer about using some local references. She gave me some suggestions and I worked them in. Instead of Wellesley, I used Washburn University plus a few other references specific to Topeka. From the cheers, they went over really well.

When I first started performing the act, I just wore gowns and gloves from my wardrobe, nothing special. In 2011, we gave the act to Devora for Madame Burlesque. We had a costumer for that show (our first tour!) and she made a lovely costume for D.D. based on a photo of Gypsy.

I used mostly the same costume when I did the act (we had to make a matching bra to fit me).

When I got the word I was going to do this act in Topeka, I decided to upgrade the costume, really make it match the photo. I had asked for advice in finding a hat like that when I learned, to my shock, we’d been laboring under a false assumption. That wasn’t Gypsy! It was Burgundy Brixx *as* Gypsy! Clearly our costume designed hadn’t done her research very well, but I admit, I hadn’t looked closely enough.

Well, there was absolutely no reason to recreate someone else’s interpretation of Gypsy. I went back to photos that I know were actually of Gypsy and picked out some of the hallmarks of her costumes — full skirt, modest blouse with a big collar, stockings, wide-brimmed hat.

The skirt came from The Wrathskellar. It was sort of inspired by a saloon girl look, with alternating panels of black lace over black jacquard and embroidered green lace. It has matching panties and a bra, so I figured I would use them. I also had a garter belt that coordinated nicely. The next challenge, the hat and the blouse.

I didn’t want to use the hat D.D. is wearing above. It doesn’t fit me very well and it doesn’t pack easily. I wanted to do this trip with just a carry-on and I also wanted to be able to have my ubiquitous sunhat. After some fruitless searching, I was in Emporium 32 and they had the perfect hat! Big brim, black straw, good price. I decided I’d give my signature leopard-print sunhat a break (I’ve been wearing it every summer for almost 20 years) and make this my new everyday hat, as well as use it in this performance. If I’d had more time, I would have added some big white roses and a new hat band for the show.

I looked all over for a blouse with the right look and just found nothing. I ended up grabbing the blouse from my “Li’l Red Riding Hood” act, but while it has the right shape, it’s a sturdy white cotton and didn’t blend so well with the lacy skirt. Fortunately, I still had some of the two kinds of lace I used to make the skirt. I used it to make a big collar, like Gypsy had in some iterations of her costume. It helped tie things together, and since it was just pinned in place, I can easily transfer it to a more appropriate blouse once I find or make one.

Lastly, I upgraded the pasties. They had just been black brocade with a ring of green rhinestones around the edge. Good for The Wrathskellar, but not exactly projecting glamour. Some radiating lines of more stones and they had sufficient sparkle.

And here’s a bit of the act on stage at Jayhawk Theatre. 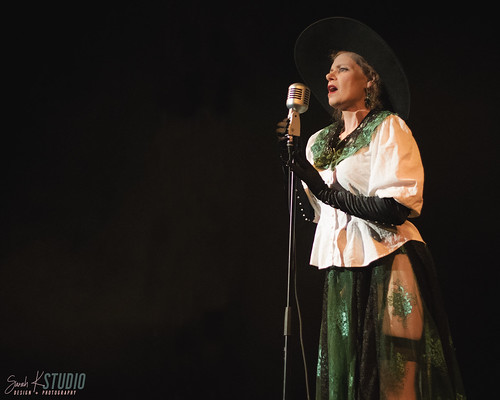 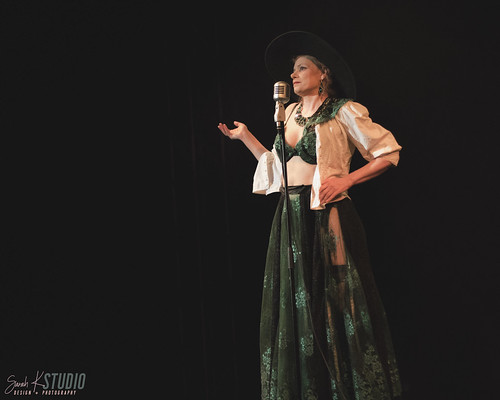 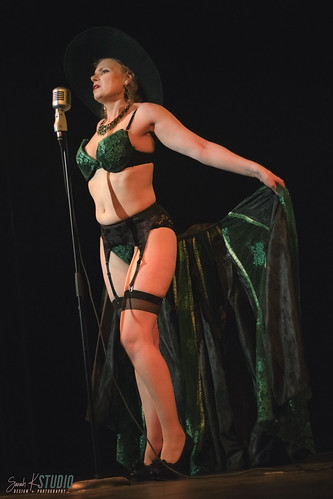