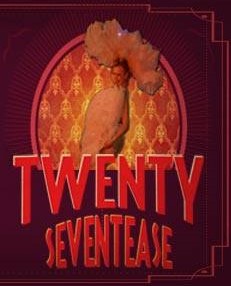 Looking back on 2017, it was a mixed year. We had some extreme lows, but some great moments as well.

January
B.A.B.E. officially moves out of our dedicated studio and into The Thalia. While I’m grateful to no longer be responsible for so much (especially that much rent), I do miss having my own space.

Also this month we make a poor choice in marketing our February show. The backlash reignited the ire of the Boston burlesque scene against us and a number of former allies disavowed us. It was very ugly. I can barely even talk about it now, but at the time I was a complete wreck and strongly considered giving up burlesque completely.

February
The Expo, of course, is bracketed by snowstorms and attendance is way down.

We present The Road to Striptopia, a rather clever show, if I do say so myself, with a witty script and some fine performances by our apprentices. The audience is tiny, which is terribly disheartening.

Also, we see Dita when she passes through Boston. It’s an inspiring show, as you will see later.

I go to New Mexico for the first time. In short, it was beautiful. I performed in a new state, saw old friends (and met some new ones), ate great food, and had a hell of a time getting home thanks to an ill-time East Coast snowstorm.

April
Devora goes back to school and cuts back on time with us. We understand but miss her.

May
Inspired by Dita’s big props, we base a whole show on big props with all the cast members learning to build their own props. We work with wood, plastic, metal, papier mache, electrical, &c. The Big Time is a lot of work, but the results are impressive. The audience is tiny.

June
Scratch goes to BHoF; most of the rest of us work RiverFest.

We go to Maine for a private show. Road trips are usually fun and something of an adventure and this is no exception.

The Mini-Expo was a chance to have some fun when it wasn’t snowing (although we kept the snowblower on the porch at Stately Babydoll Manor just in case. It’s wonderful to spend some time with Egypt Blaque Knyle.

The troupe goes to the Pennsylvania Burlesque Festival. Originally I’d applied solo and found out I was accepted before the deadline, so we also submitted as a group. I’m also invited to teach. 9 days before the festival one of the performers is too sick to continue. Betty & Brigitte rechoreograph our five person number for four and we all work like hell. We’re very pleased with the results.

I go to ABurlyQ. I’m very excited about this because it was my first festival acceptance in years. Also, it’s great to have an excuse to go back to NM. I see friends, teach, learn, watch terrific performances, and have amazing BBQ.

While I’m gone the troupe performs Cover Girls, acts to songs by artists who didn’t make them famous, at two new venues, Deacon Giles Speakeasy Lab and The Strand Ballroom.

September
We invite Devastasia to officially join the troupe.

We present Cover Girls at The Thalia and I finally get to perform “Bohemian Rhapsody in Blue”.

We perform in Salem on Friday, October 13th. The show is called Bad Luck Burlesque, but it’s good luck for us because we sell out both shows.

We are all too exhausted to produce The Wrathskellar this year, so instead Scratch writes Panties Inferno, a light-hearted romp through hell. It is very good and quite clever. And it completely sells out.

November
We return to The Strand Ballroom for another iteration of Bad Luck Burlesque.

We are invited to perform at RuffleCon for the third year, the best audience yet.

We invite Artemisia to officially join the troupe.

December
We aren’t planning on doing a winter holiday show, but Brigitte really wants to do her Christmas numbers. Brrrlesque sells out at both The Thalia and at Deacon Giles. I debut a new number and am quite pleased with it. (Yes, the photo is from The Expo, by George Ross. I didn’t get one in December)

We go to The Strand Ballroom for New Year’s Tease. It’s really cold and the audience is relatively small, but very appreciative. My troupe mates demonstrate once again that they’re pretty terrific people who work very hard.

In short, some good, some bad. I think things got better as the year went on.

Here’s hoping things get better and better in 2018!