A Tribute to April March
The First Lady of Burlesque 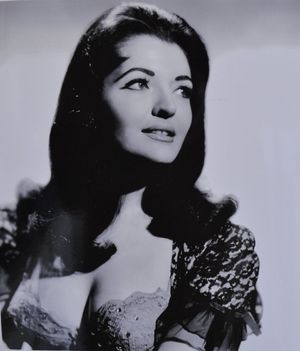 I was honored and humbled to be asked to create a tribute act to April March, The First Lady of Burlesque. Little did I know what I was getting myself into. To truly due justice to this living legend of burlesque, everything had to be perfect: costume, music, prop, choreography, hair make-up, and all presented their own challenges. I've chronicled below all that went into creating this act, which had its debut at the Great Burlesque Expo of 2011.

April March began her burlesque career in Dallas at the age of 17. She soon became a headliner in nightclubs throughout the country. When someone commented on her resemblance to Jacqueline Kennedy, she began billing herself as "The First Lady of Burlesque". Some of her most famous appearances were in Harold Minsky's revue, Ann Corio's Broadway show This Was Burlesque, and Jim Henson's short film Time Piece.

Miss March was known for her elegant striptease, particularly her glove and stocking removes. She takes pride in never being raunchy or rude on stage. Her grace and charm on-stage and off made her a favorite of club owners and audience member alike. To this day she is a role model for neo-burlesque performers all over the world.

The costume I replicated is one of Miss March's few existing costume sets. The original costume was made by Simon Sorr in Morristown, New Jersey. He always told her that she was so beautiful she didn't need an excess of glitz. Her costumes were simple and elegant in design, but used rich and luxurious fabrics. Her costumes were made from brocade and velvet with a lot a beadwork, but very few rhinestones.

This costume was replicated predominantly from photographs that I took and a few examinations of the original garments. Its not an exact replica, but as close as I could make it. The pictures below are from the reference photos I took.
Gown

The original gown was made of red velveteen with a black lining. It has a slit at the back hem and a back zipper. It is decorated with 3 beaded floral motifs around the neckline and one slightly off center at the hem.

The original beads were worked on net as separate appliques, but I discovered that detail too late. All the beadwork has been done directly on the garments.

I used Vogue V8666 pattern in the sleeveless variation. Its not exactly the same (the original gown doesn't have vertical darts for fitting), but gives a similar shape. The original dress was lined in black, but I used red cotton because didn't want hints of black poking through. The original fabric is an orange-red, while mine shades closer to scarlet.

In April 2012, I curated an exhibit of vintage and significant modern burlesque costumes at The West End Museum. Of course, it included April March's red costume and my reproduction. When setting up the display I was embarrassed to discover that I had completely overlooked the fact that the zipper on the gown runs all the way down to the back slit. The gown opens entirely and never has to be dropped to the floor to step out of it. I have replaced the zipper in my gown, using a plastic zipper instead of the original metal one, and reworked the choreography for the gown remove.

The original bra was a black commercial bra, covered with red velveteen on the cups. The back and shoulder straps were left black. The same floral motif as on the gown was used, one on each cup. Above each flower is a leaf motif, outlined in pearl beads and filled in with bugle beads, a stripe of gold down the center of the motif and silver around it. Then the entire leaf motif was outlined with silver bugle beads. The motifs were outlined with a mixture of gold and silver seed beads interlaced through the outer row of beads.

The rest of the cups are covered with a random pattern of gold and silver beads. The shoulder and back straps were decorated with prong-set aurora borealis rhinestones. On the original bra, one of the strap is twisted and the rhinestones are attached on the underside. I did not replicate that quirk.

The replica bra has a mesh back strap, like the original, but is shaped somewhat differently and doesn't have as much padding as the original. Miss March notes that she wasn't very busty; perhaps Mr. Sorr was just giving her a little help.

The biggest discrepancy here is the beaded swags at the top. I just couldn't find beads of the same shape and the same size, so I went for the correct shape. The original beads were about half the size of the replicas, so my swags are twice as large. Originally the ends of each loop were an inch apart and here they're two inches.
Garter Belt 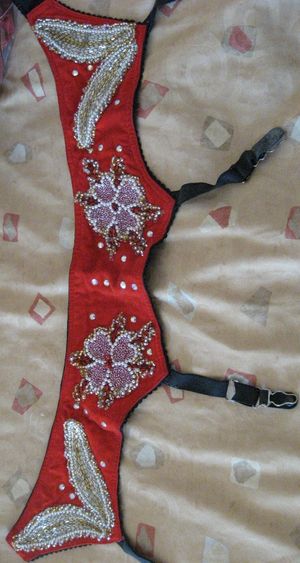 The original was a commercial black garter belt, covered with red velvet. You can still see the black poking around the edges. As I could not find a commercial belt similar to the original, I drafted my own pattern based on the photos. The velvet is interlined with black denim and lined with red cotton. The original has a bit of black elastic across the back, which I included and ended up not using. The garters themselves are purchased and detachable.

The beading motifs are the same as on the bra, without the fill of gold silver seed beads. Instead, the garter belt is decorated with prong-set aurora borealis rhinestones. 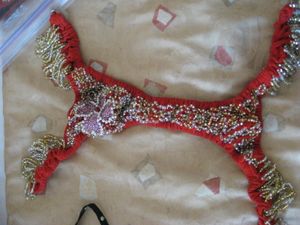 This was the hardest part of the project for me. I never made panties before and fitting them was a challenge. This is the only garment for which I enlisted outside help: Kristen Augenfeld checked the fit and gave the second opinion I needed. I chose to make the reproduction fuller cut in the back than the original, as its a better look for me. Of course, that meant more surface area to bead.

The loops of beads over the hips are made from a random mixture of the same gold silver seed beads that were used for fill.

The original fastened with a single hook eye over each hip. For extra security and comfort, I used flat hooks and bars. 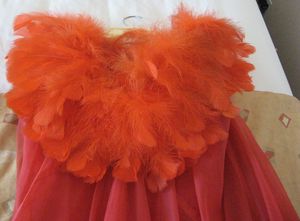 The original sleeveless robe is made of a sheer nylon with feather trim around the neckline.

At the time the tribute act debuted, I was unable to finish the robe, so Miss March graciously let me wear the original. Since Miss March also used a boa, as an alternative to a robe, I am using a boa in the video that was shot prior to the debut of the act.

The replica was made of crystal organza with a chandelle boa for trim.

Pasties
The original pasties weren't preserved. Although Miss March remembers wearing gold ones, I made red velveteen pasties with gold and silver beads to match the g-string.
G-string 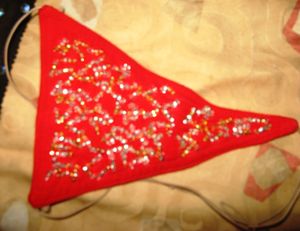 The g-string is a triangle of red velveteen with a scatter pattern of gold and silver beads. The original had flesh-colored elastic, but the flash from my camera made it look gold, so that's what I used. I rather like the look so I haven't changed it.

Gloves
I used commercially purchased red satin gloves. The original gloves were simple opera gloves with no decoration. Miss March says she was always "matchy-matchy", wearing the same color gloves as gown.
Shoes
Miss March remembers wearing gold pumps with a 4 to 5 inch heel and I was fortunate enough to find a pair that she declared perfect. In keeping with her simple, elegant style, they are unadorned.
Stockings
When April March worked for Harold Minsky, he preferred she wear sheer black stocking with a seam up the back, which he purchased for her. Left to her own choice, she wore Hanes nude stockings. I used vintage-style black stockings.
Jewelry
April March never wore necklaces or bracelets, so the only jewelry I wear is a pair of rhinestone earrings.

April always referred to the setpiece pictured as the prop. She used it in the mid 1960's, at the time she was performing for Harold Minsky and Ann Corio. After she sold this one, she just used a coffee table that had been covered in fake fur.

The original prop had a back covered in black, white and turquoise tiles. April wore a turquoise costume and used a turquoise drape and ostrich feathers, because she liked to be matchy-matchy.

For the reproduction prop, we started with a coffee table, which was somewhat larger than the base in the photo. The back was also made larger than the original. Scratch did all the construction work: cutting the back, modifying the table, and padding the table top. The back is plywood and hinged down the middle for storage and transport.

We decided glass tiles would make the back too heavy and searched fruitlessly for a substitute in plastic or vinyl. Finally, we decided to abandon the tile all together and make a removable fabric cover. The cover is made from ivory satin covered in dimensional roses, which have been touched with glitter. It's more of an homage than a replica.

Continuing in the matchy-matchy vein, since my costume was red, I sewed a drape out of red satin and attached red ostrich plumes to the back.