One of my friends sent me this mid-century recipe and kind of dared me to make it. So, of course, I did. If you want to see the whole process in living color, become one of my Patrons!

Carnival Cream is a simple frozen dessert, a little bit like ice cream, with a very special ingredient, which I will reveal later. 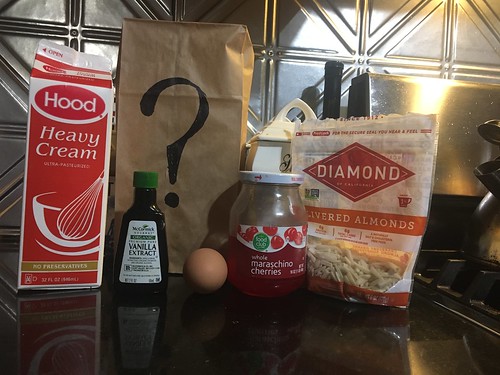 eggs, heavy cream, sugar, vanilla, the Special Ingredient, and maraschino cherries & toasted almonds for topping. (there is actually sugar in this picture — hiding behind the almonds)

Beat the eggs with sugar until thick. Whip the cream until stiff. Carefully fold in the vanilla and Special Ingredient. Fold in the eggs. Pour the mixture into molds and top with chopped cherries and almonds. Freeze until firm. 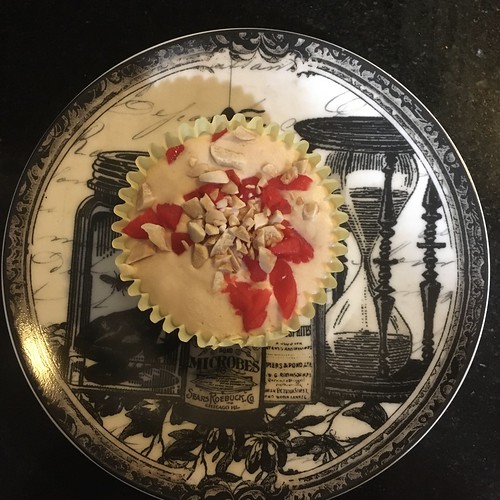 What did I think? It’s sweet and creamy. It’s also much firmer than ice cream, since there’s no churning. Maybe you could use a spoon if you let it thaw a little, but I bit right into it. The cherries and nuts add some much needed texture. The Special Ingredient provides a subtle, but distinctive flavor. It might not be immediately recognized.

So what is the Special Ingredient?

Yes, you read that correctly. This was a recipe from Heinz Ketchup.
For a dessert.
Containing ketchup.
You see why I just had to try it.

It’s not a disgusting as you might think. Really. It’s kind of odd, but not terrible. One could probably use sriracha instead of ketchup if one liked spicy things (I don’t) and be rather au courant.

Here’s the original recipe. (I rearranged the order slightly in my video and above for dramatic effect.)

These writings and other creative projects are supported by my 15 Patrons. Thank you so much! To become a Patron, go to my Patreon page. Or you can just tip me if you liked this.