In the Kitchen: Cherry Bounce

It seems you all like my cooking posts best (at least according to my site stats), so I’ll endeavor to give you more!

This latest recipe is very vintage — it dates back to at least the 18th century! As you, dear Reader, know well, early summer brings cherries to The Manor and a desperate attempt to use them and preserve them. This year I was determined to try Cherry Bounce, a cordial popular in colonial days. It was said to be a favorite of George Washington.

Cherry bounce is made with cherries (or any stone fruit, though you’d have to change the name…), sugar, and liquor. Washington liked his with brandy, but you can also use rum or whiskey or vodka. Each adds its own characteristics to the bounce. Sometimes the fruit is used whole, sometimes it’s pressed for its juice. You can also add spices or even fresh herbs. For a lower proof, add some water. I’ve seen so many variations.

We used a very simple recipe that’s much like my Christmas fan dance: Sugar Rum Cherry. I wanted to use rum, as it’s very New England and also my favorite spirit. I decided not to add any spices as I feared the results might taste like cough syrup (based on an unfortunate experiment with raspberry cordial once).

Take a big glass jar with a lid. Add a pound of sugar and then a little rum to dissolve. Add a pound of cherries and mash them a bit. Pour a quart of rum over it all. Let it sit in a sunny place for a week, then store in a dark place for at least a month. Strain the liquid and pour into bottles.

We made two versions, each with 2 pounds of sugar, 2 pounds of cherries, and a 1.75 L bottle of rum. The first was a white rum and we put the cherries in whole and then bashed them around with a spoon after the rum was added. The second was gold rum and we bashed the cherries into the sugar with a potato masher before adding the rum.

We let the jars of bounce sit for a week in the pantry and I would stir them every day to make sure the sugar stayed in solution and further bruise the cherries. Then we stashed them in a cabinet for about 2 months. I strained out the cherries and poured the bounce back into the jars. The white rum bounce is pretty clear, but the gold, where the cherries were crushed, has a lot of sediment. I need to find some attractive bottles to decant the bounce into. When I bottle it, I’ll strain it too (coffee filters work well for that). 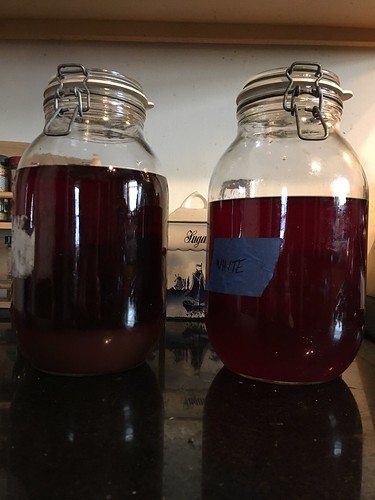 So, how does it taste? Very good. It’s intensely cherry. I think the white is actually more cherry-flavored than the gold. The gold has more of a boozy taste. And they’re both quite strong. It’s a nice dessert tipple to be drunk out of wee glasses. I’m sure some creative sort could come up with a cocktail that uses cherry bounce.

I was going to toss the cherries, assuming they had given up all their cherry goodness and no longer tasted like anything. However, upon sampling, they still taste like cherries and very much like rum. I pulled out all the whole ones and froze them. They’ll be great over ice cream. Maybe I’ll even flame them like cherries jubilee.

Martha Washington’s original recipe, if you want give it a try:
Extract the juice of 20 pounds well ripend Morrella cherrys. Add to this 10 quarts of old french brandy and sweeten it with White sugar to your taste. To 5 gallons of this mixture add one ounce of spice such as cinnamon, cloves and nutmegs of each an Equal quantity slightly bruis’d and a pint and half of cherry kirnels that have been gently broken in a mortar. After the liquor has fermented let it stand close-stoped for a month or six weeks then bottle it, remembering to put a lump of Loaf Sugar into each bottle.