In the Kitchen: Chocolate Pudding (1956)

Although there are all sorts of fun and interesting chocolate recipes, I was looking for something I could scale down and that I had everything already. I decided on Chocolate Pudding. Easy and simple. 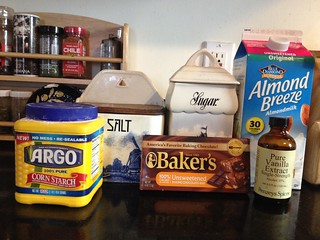 The original recipe called for flour to thicken the pudding, but I know from experience that it tends to have a “floury” taste and can be difficult to incorporate smoothly. I used cornstarch instead. Rice flour would probably also work as a thickener

Add milk and stir to combine. Obviously you’re supposed to use real milk, but almond milk works perfectly fine. If you’re using flour, mix really well to keep it from being lumpy. Add the unsweetened chocolate and place over boiling water.

Baker’s unsweetened chocolate used to come in individually wrapped one-ounce squares and many recipes call for squares of chocolate. Recently Baker’s switched to selling the chocolate as a bar with half-ounce squares. Just be aware.

Chopping the chocolate before adding it makes it melt faster and more evenly. It would have taken so much longer with the whole one-ounce squares. As it was I broke the squares into quarter-ounce pieces and they didn’t melt very evenly.

Cook the pudding over boiling water until it starts to thicken. Then cook 10 minutes more. Add the vanilla and chill.

Serve with cream poured over. There were variations that were topped with flavored whipped cream (like with orange marmalade folded into it), but the basic recipe used plain cream. This was a new one to me, but it worked. 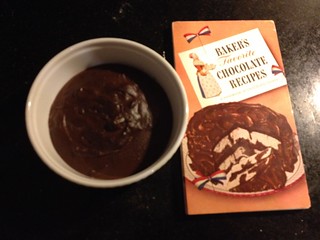 Combine sugar, corn starch, and salt in a medium saucepan that works as a double boiler. Also start water boiling in the bottom pan of the double boiler.

Pour into serving dish or individual bowls. Chill. Serve with cream poured over.