I’ve been dying to try Gold and Silver Cake from one of my vintage recipe pamphlets, so I decided to make it as my birthday cake. The pamphlet in question, The Latest Cake Secrets, was pushing Swansdown cake flour and Baker’s coconut. I confess, I used Softasilk flour (more about the coconut below).

The cake itself is pretty simple, just a basic white cake. The flour does get sifted *four* times, once before measuring and then 3 times with salt and baking powder. This is added to creamed butter and sugar, alternating with milk. Flavor with some almond and orange extracts. Then fold in some stiffly beaten egg whites. Use a really big bowl. This recipe makes a lot of batter and you want room to gently incorporate the egg whites.

Now, it gets interesting. Take 1/3 of the batter and pour it into a cake pan. Then add beaten egg yolks to the remaining batter and divide it between 2 more pans. Thus you should (in theory) have a white layer and 2 yellow layers. Hence gold and silver.

This was the first time I baked a layer cake and used cake bands, which were totally successful. A cake band is a strip of cloth that is soaked in cold water and wrapped around the outside of the cake pan. It keeps the outside from cooking faster than the middle which is what makes the cake rise up in the center. While my layers weren’t perfectly flat, they were close enough that I didn’t feel the need to level them.

The color difference wasn’t as great as I might have hoped. Perhaps more egg yolks are needed.

The cake is then stacked gold-silver-gold with orange filling between the layers. The filling is made with sugar, water, orange juice, lemon juice, whole eggs, and cake flour cooked in a double boiler. Once it thickened, it’s finished with butter and orange zest. I didn’t love how it turned out. The flour lumped a lot and gave the filling a sort of floury flavor. I’d feared this might be the case, but I was determined to stick to the recipe as writ. Obviously the pamphlet was trying to put cake flour in as much as they could, but I’d use cornstarch next time. Also, the cake called for a double recipe of filling, which was way too much.

Then the cake gets frosted with a classic seven minute frosting. Cook (again in a double boiler) sugar, orange and lemon juices, and egg whites, beating constantly, for at least 7 minutes or until it’s thick and spreadable. Add some orange zest once it comes off the heat.

Sprinkle the top of the cake with a mixture of shredded coconut and orange zest. You want to do this right after the cake is frosted and the frosting is still gooey. The frosting dries to a crispy sugar shell and the topping would just slide off if you tried to add it at that point. The topping recipe called for Baker’s Southern Style Coconut, which they don’t make any more. It came in a can and was billed as being moist, like fresh coconut. I figured basic flaked coconut from the baking aisle was probably about the same thing. Packaging technology has moved on…

It was pretty successful for a first attempt. At least my guests liked it. I’m not giving you the recipe like I usually do, since I’m not satisfied with it and want to make some changes before I release it into the wild.

This was the cake: 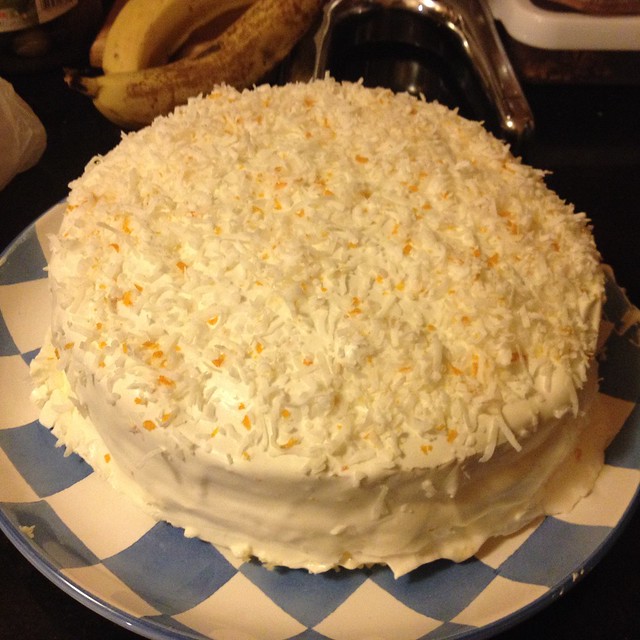