I’m so sorry for the recently silence. I have a lot of catching up to do! It’s been crazy busy for me recently and this was part of it. 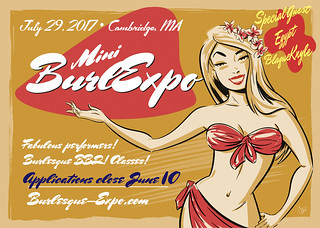 The last Saturday in July was the first ever Mini BurlExpo. The what? Every year Scratch hosts The Great Burlesque Exposition, a massive three-day burlesque event, which for various reasons beyond his control, has been held in February for the past several years. And invariably there has been a snowstorm that very weekend, causing chaos and disruption. He thought it would be fun to have a small, low-key version of the Expo in the summer.

Friday night there was a performer cookout, sponsored by Viva Vermont Burlesque, held in the backyard at The Manor. We cooked hot dogs and s’mores over the fire, drank local beer, and generally had a lovely time.

Next morning it was off to The Thalia for a day of classes. The regular Expo has 4 tracks of classes over 3 days, so a mere 5 classes (plus one on Sunday) was a bit more manageable. The offerings included marketing, ballet for burlesque, chair & floor work, and twerking.

In the evening there were two shows, as compared to The Expo’s four over three days. The first, The Mini Event, was a take off on The Main Event, the Expo’s competition. Instead of competing for serious titles like “Most Classic”, the performers were in the running for audience-voted awards like “Damn! That Was Awesome!” and ridiculously random trophies.

The show opened with an adorable group number from The Expositionettes, created by Betty Blaize and featuring her, Artemisia Vulgaris, Brigitte Bisoux, Devastacia, and Kitty Levesque. I’d like to point out that Brigitte was filling in for a performer struck ill and she only had one rehearsal. She’s just that good.

We had a whole host of performers, from all over the country, showing off the beautiful and the bizarre. There were veterans and neophytes and a whole range of performances styles, all creative and entertaining.

While the very official ballot-counters were tabulating the results (that would have been me and Betty), the audience was entertained by Diamond DeVille (Most Beautiful 2017), and Egypt Blaque Knyle (Best Solo 2016 and a huge number of other awards). I’m glad we counted efficiently and I was able to see most of Egypt’s remarkable performance.

The well-deserving winners were Bea Trouble who received “Greatest Googly-Moogly” for her cow-themed striptease (it was fabulously absurd and I’m not giving away the punchline), Mr. and Mrs. Fucksmart who were awarded “Most Pantsfeelings” for their sexy duet to “Tainted Love”, and Tapitha Kix was honored with “Damn! That Was Awesome” for her tap pointe striptease (yes, seriously, she can tap dance en pointe). Everyone put on a great show!

Then it was time for the second show, Late Night Lust, a passel of more risque acts. I was delighted to have the opportunity to perform my bathtub act with the lovely Artemisia Vulgaris as my lady’s maid. I really love this act, but it’s difficult to find a venue for it — it’s long (almost 8 minutes), it has a fussy set up, it requires a second performer to be my maid (it’s too complex a job to just ask a stage kitten to help) and requires a stage on to which the tub can be rolled (it’s really heavy once it’s filled with water, so carrying it up steps is right out). I feel so Lili St. Cyr-ish when I get to bathe. Maybe this time I’ll finally get some decent video — it’s been like a curse.

The next morning those that were up to it returned to the theatre for a little brunch and another class from Egypt (fantastic, by the way) and our little Expo interlude was over. It was a fun event for the middle of the summer. Who knows? it may become tradition! And now it’s time to start gearing up for The Great Burlesque Expo in January. Hope for no snow storms!