I’ve been writing a report of my trip to the New Orleans Burlesqeu Retreat. You can read about what happened on Wednesday and Thursday. 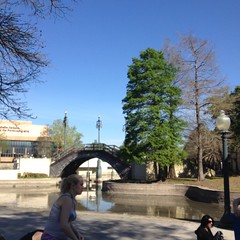 Friday morning came early. We grabbed our yoga mats and stumbled out the door to the park near the studio. It was lovely doing yoga there in the cool morning. A beautiful start to the day.

We began the day’s classes with a panel on production with most of our instructors answering questions (a couple of them were occupied elsewhere, but I’ll get to that). So many burlesque performers have to produce their own shows, so it was helpful to get several perspectives. We’re fortunate that we have a producer and I don’t usually have to worry about things like this, but it’s good to be knowledgeable all the same.

After that we broke for lunch. Gaea Lady and Dahlia Fatale had been busy in the kitchen (hence not on the production panel) whipping up a substantial vegan luncheon. We took our plates to the courtyard next to the studio to enjoy a little fresh air. Courtyards are one of those things I really love about New Orleans; they’re not something we have in New England.

Back to work with Sexing the Stage with Sweetpea. This was a terrific class, but absolutely mobbed. In addition to all the retreat participants, one of the bachelorette parties from Whiskey and Rhinestones the night before was in attendance. There was a lot of work with eye contact, touching, and energy. Breathing is so important on stage.

Then we got to sit for a bit for Stage Tech with AJay Strong. Although he touched on a variety of tech issues, his forte is audio. We discussed a variety of audio issues and factors. A lot of people were interested in getting more in-depth information about audio editing and playback.

Dahlia Fatale absolutely kicked our asses with Floorwork. I knew she would, but I was even more impressed because she was filling in for Perle Noire whose flight out of NYC was canceled by the same storm that was worrying me. We did some work on transitions (always necessary!) and ran through a challenging choreography. Dahlia was very good about providing modifications for some of the moves.

Our last class of the day was Intentional Performance with Gaea Lady. To begin we had to state an intention (for the class, for the retreat, &c). Mine was “Be better”. It’s a philosophy you’ve probably hear me espouse before. Later when we broke into small groups, we had to elaborate on our intentions. I chose that one because perfection is unattainable, but you can always be better, even if it’s in very small ways. 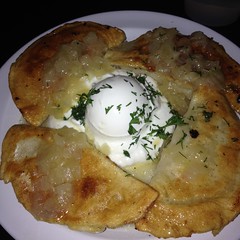 I decided to skip Whiskey and Rhinetones, which would have required racing out almost as soon as we got back, and opted to get ready for the Instructors’ Showcase at midnight in a more leisurely fashion. Also, my brain was very full and needed a bit of rest. I was delighted to learn that Siberia was across the street from the venue. Some of my flatmates, Jen and Maureen, and I had some delightful Russian food there, like the lovely pierogis in the photo. 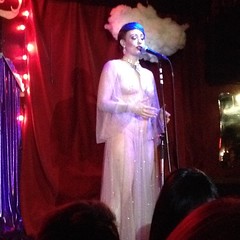 Then we walked over to the Allways Lounge to see our instructors’ strut their stuff. Bella hosted the show and announced that because of the peculiarities of the venue, the performers can take it ALL off. Sweetpea started with a high-energy strip. The moment when she removed her bra and wasn’t wearing pasties was so powerful. Gaea came next with the same act I had seen the night before, only now under her veil, she was wearing only jewelry. Lola sang Tori Amos’s “Leather”, giving emphasis to the opening line. The microphone wasn’t working for her, so eventually she just flung it dramatically away and continued unamplified. Then Bella introduced herself and did something beautiful with a boa. I was delighted to see many of the moves she had taught us the day before (was it only the day before?). Dahlia did a contortion routine while smoking a cigarette. The high point of which was when she parked the cigarette between her toes while lying on the floor and then brought her foot up behind her head to take a puff.

Then there was a brief diversion while Sweetpea and Gaea introduced a little game to the audience. They would hold a plastic cup somewhere against their anatomy and if an audience member could sink a wadded-up dollar bill into the cup, said audience member would receive a shot from Dakota Crow, the lovely stage hand. Also clothing would come off. After that amusement, the show closed with a rather blasphemous group act with AJay (as a priest), Bella, Lola, Dahlia (as the congregants), and a large tub (for the baptism).

It was a fabulous show, but I was more than ready for bed. Yoga was going to come early in the morning…