I’m writing about my time at Stripper’s Holiday in Los Angeles. It’s been taking me longer than I expected! You can read the first part here.

We all stayed in a big house in Studio City which was kind of incredible. It had an amazing view, a pool and hot tub, a pool table, and a home theatre. We were up in the hills and the landscaping was lovely. We even saw a deer one morning! My Patrons got to see a short video tour of some of the house.

However, it was decorated in a manner that was supposed to be lavish and stylish but was more like set dressing than a place people lived. All the surfaces were hard — tile, wood, brick, marble — I don’t think there was a single rug or carpet and none of the furniture was really comfortable (even the couches were so over-stuffed and piled with cushions that one couldn’t really lounge). Nor did the layout lend itself to socialization. Really, the only place we could all sit was around the dining table, as long as we also grabbed all the chairs from around the kitchen island. This is probably why most people spent their free time in and around the hot tub.

Franky, Michelle’s husband, handled all the cooking and kitchen clean up. Despite numerous offers to help, we were all told to just relax and be taken care of. Michelle has very strict food requirements because of her auto-immune disorder, so we ate like she did — lots of protein and vegetables, no sugar, dairy, grains, or legumes. The food was terrific and plentiful. I was perfectly happy to eat that way the whole time (although I did have a bar of Russian dark chocolate in my bag, from which I rationed out a couple of squares each evening). I’m definitely going to try making the kale with kalamata olives and the chicken-apple-bacon burgers, not to mention experimenting with almond meal for pancakes.

I tend to wake up early and this trip was no exception. Michelle had asked that everyone try not to go on-line first thing in the morning, so instead of noodling around on my phone, I would get up and work out before anyone else was awake. I liked the quiet, but, as I mentioned, the house was full of hard surfaces. My options were the bricks around the pool or the tiles in the theatre. Ouch, floor exercises were right out.

Our schedule was very relaxed. People could sleep in and then have a leisurely breakfast. We were in the studio in the afternoon to work for four hours. Since ever minute was precious, we didn’t take any formal breaks. Thinking of everything, the kitchen at the house was well stocked with nuts, fruit, and protein bars and we would assemble snack bags before we left and munch during our down time. We returned to the house to have dinner and spend the evening, usually drinking in the hot tub.

The social aspect of being with a dozen people was very hard for me. Despite my outgoing behavior with students and audience members, I’m really a very quiet person and rather shy when I’m not “on”. I’m okay with small groups of people, but I find it very difficult to join in the chaos of conversation with a big group. Partially I think this is because I have a little hearing loss in one ear, so sometimes it takes me a bit longer to parse what people are saying, especially when there’s a lot of background noise and when it’s dark so I can’t see people’s faces well. Add to this that I don’t often drink and I felt a bit on the outside in the evenings. I did get a lot of crocheting done because I feel more comfortable when I’m doing something creative with my hands and I can crochet on autopilot. 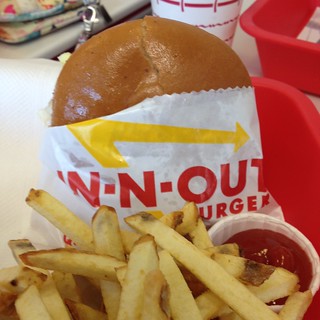 That’s not to say I kept completely to myself. Like I said, small groups are fine. One day after the studio I joined Lana MilknHoney, Elle Diablo, and Jacquelyn Hyde for In-And-Out Burgers and had a ridiculously fun time. We weren’t forbidden to have food that Michelle can’t eat (there was a constant nibbling on cheese in the evenings), but it felt kinda naughty to have a burger and fries. Someone might have gotten drunk on the sugar in her milkshake (spoiler: it wasn’t me).

We never had to be showgirls while we were in the house. Michelle specifically said don’t bring lashes or gowns and absolutely no glitter. I didn’t put on makeup or do my hair once and spent as much time as possible in my Catherine D’Lish caftan and bare feet. And that was a gift, to be around fellow burlesque performers with no pressure to glam it up.

Next up, the whole reason I was there, the work!